Memorial services for Dorothy J. Beighley, 95, of Albert Lea will be at 10:30 a.m. Monday at United Methodist Church. The Rev. John Mitchem will officiate. Interment will be at Hillcrest Cemetery. Friends may greet the family from 3 to 5 p.m. Sunday at Bayview/Freeborn Funeral Home and one hour prior to the service at the church. Online condolences are welcome at www.bayviewfuneral.com. 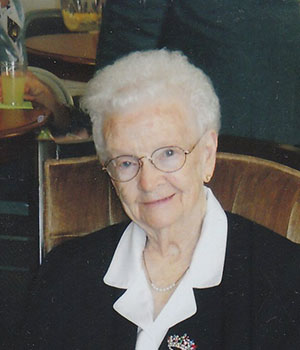 Dorothy June Beighley was born July 21, 1920, in Hayward, the daughter of Bennie and Lela (Jackson) Thompson. She grew up in Hayward and attended country school. Dorothy married Elvin Beighley on Jan. 14, 1938, in Mason City. She was a cook in grade schools and worked at Mrs. Gerry’s. Dorothy attended United Methodist Church, where she was a member of the circle. She enjoyed baking, dancing with her husband, playing rummy, watching the Minnesota Twins and playing bingo. She also volunteered at Good Samaritan Society of Albert Lea.  Everyone looked up to Dorothy, who served as the matriarch of her large family. She was nominated for Mother of the Year in the 1950s.

The family would like to thank the staff of Oak Park Place for their wonderful care. She will be sadly missed by her family.