A celebration of life for DuWayne G. Kirchner of Albert Lea will be at 11 a.m. Monday at Grace Lutheran Church in Albert Lea. The Rev. Janet White will officiate. Interment will be in Graceland Cemetery. Military honors will be accorded by Albert Lea veterans organizations. Visitation will be from 4 to 7 p.m. Sunday at Bonnerup Funeral Service and one hour before services at the church.

DuWayne died peacefully on Wednesday, March 30, 2016, at Prairie Senior Cottages in Albert Lea. He was 78. 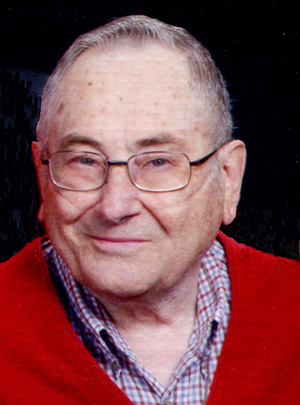 He was born on May 24, 1937, in Renova, the son of George A. and Christine A. (Hage) Kirchner. DuWayne graduated from Elma High School in Elma, Iowa, where he had attained 12 years of perfect attendance. He then proudly served in the Army Reserves.

DuWayne worked at Elma Locker Plant in Elma for four years before moving to Rochester.

He began working for Piggly Wiggly Grocery in Rochester, where he was promoted to meat manager. He moved to Albert Lea in 1965. On Dec. 10, 1966, DuWayne married Marguerite A. O’Donnell of Forest City, Iowa, at Zion Lutheran Church in Albert Lea.

He spent the rest of his career as an insurance agent for AAL, retiring in 1992 due to a medical disability.

During his years with AAL, DuWayne spent countless hours organizing benefits for individuals who needed financial support  and received many honors and accolades for his outstanding service. He always held his clients in the highest regard and did the very best he could to see that they were protected and safe. He was a man who had compassion for everyone he came in contact with. Whether he knew them or not, he always tried to find a way to help.  He was a very generous man who did things whenever he could to give back to the community and to anyone in need. He loved to cook and bake. He was especially known for making soups and he loved to see people enjoy what he made. He and Margie were daycare for both their grandchildren. The greatest joy that kept him going when doctors felt he would not was focusing on Landon and Kaedyn, and being there for every moment of their lives.

DuWayne was a member of Zion Lutheran Church, where he had served in various positions as well as elder, and was a member of Grace Lutheran Church. He was an avid sports fan and enjoyed fishing, singing and mostly spending time with his beloved family. DuWayne’s greatest gift was his faith.  He never once questioned his illness and shared and witnessed his faith every chance he got.

DuWayne will be greatly missed by his wife, Margie; sons Robert Kirchner and Bradley Kirchner and his wife, Jody, and their children Landon and Kaedyn, all of Albert Lea; sisters Beverly Flugge of Elma and Delores Halweg of Hawkeye, Iowa; sister-in-law, Lois Kirchner, of Jefferson, Iowa; and many nieces, nephews,