Funeral services for Elaine T. Peterson will be at 10:30 a.m. Tuesday at First Lutheran Church in Albert Lea. The Rev. John Holt will officiate. Visitation will be from 5 to 8 p.m. today at the Bonnerup Funeral Service chapel, as well as one hour prior to the service at the church.  Interment will take place at Graceland Cemetery. Bonnerup Funeral Service is assisting the family. 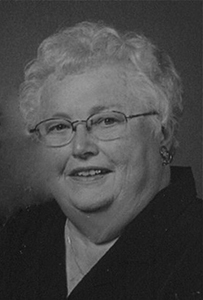 Elaine passed away on Saturday, April 23, 2016, at Thorne Crest Senior Living Community.  She was 85.

Elaine T. (Legried) was born on May 6, 1930, in Albert Lea, to Harry and Stella (Tukua) Legried.  She graduated from Freeborn High School in 1947. She went on to attend a six month business program in Minneapolis. Elaine married Lenard Giles. To this union, she was blessed with two children. The couple later divorced. On Nov. 7, 1959, she was united in marriage to Milo Peterson.

Elaine worked in payroll and pension for Queens Stoves, which evolved into ALMCO. She worked there for nearly 35 years. She truly loved to work.

In her free time, you could find Elaine volunteering in many different ways. She was the president of the Shriners Auxiliary for many years; she volunteered her time at the hospital, blood mobile and The Salvation Army. She was named the Volunteer of the Year for the Sertoma Club. She enjoyed cooking and was a very talented seamstress. She even sewed clothing for people while she was living at Thorne Crest Senior Living Community. She could be described as a caring, independent woman with a very strong work ethic. She loved conversations with people and loved her family. She especially cherished her three great-grandsons. They meant the world to her.

She is preceded in death by her parents Harry and Stella; husband, Milo, in 2013; and a brother-in-law, Calvin Lyle.