Gaylen died of complications from pulmonary fibrosis on Tuesday, April 26, 2016, in his room at Nicollet Place in Blue Earth, surrounded by his family. 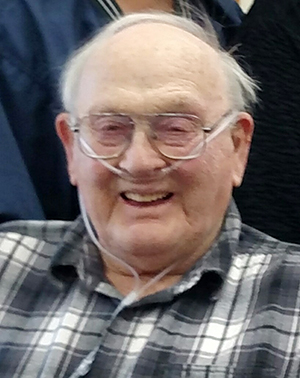 He was born in Belgrade, Nebraska on May 19, 1927, the son of Roy J. and Elsie (Sanford) Reeves. Gaylen attended school in Belgrade. In 1937, he and his family moved to Eagle Bend.  At age 13, Gaylen began working on the Clementson dairy farm in rural Todd County. He and Marley (Holt) Reeves were married Dec. 9, 1950 in Clotho and began their family with Sheila, Debra and Delwin, who died in infancy and is buried in Carlos. They moved to Albert Lea in 1955, where Gaylen became employed by the Albert Lea Co-op Creamery and he and Marley joined Assemblies of God Church. Dawn and Byron soon joined the family, and Joey and Morray came along later. In 1968, their rural home was destroyed by fire. This set Gaylen and his good friend John Colstrup on a mission to look for a new Reeves family home, which was found in Bricelyn. Gaylen and Marley moved their family to Bricelyn in October 1969, where they joined the Baptist Church, enrolled the kids in Bricelyn School and made wonderful memories for 40 years. Gaylen became employed by the Bricelyn elevator shortly after the move and retired in 1992. For many of those years he spent evenings next door with his mother watching television and enjoying a dish of ice cream that was always cut out of the box and eaten with a knife. After retirement, Gaylen and Marley enjoyed spending summers at their trailer in Eagle Bend, helping out on Sheila and Ron’s farm during the day and playing cards with friends and family each evening. In 2010, Gaylen and Marley downsized and moved to an apartment in Blue Earth, where they enjoyed dining and activities at the Senior Center and becoming members of and attending church at Cornerstone.

Gaylen spent his life helping others. He was always there to trim a tree, mow a yard, shovel a walk, clean a grove, lend out a tool or take in an appliance for recycling. In 2004, Gaylen was selected Faribault County Outstanding Senior Citizen, an honor he didn’t think he deserved, but made his kids mighty proud. He loved to ride bike, play cards and give bear hugs, and he loved and trusted the Lord to the fullest measure. He always said each of his children and their children were worth a million bucks — thus justifying his claim as a millionaire.

Gaylen was preceded in death by his parents; his in-laws Oren and Margaret Holt; his son, Delwin; his brother, Leland, and wife, Garnet; his sister, Twyla, and husband, Bernard Reger; and brothers-in-law and sisters-in-law Joyce and wife, Helen Holt, Donald Eklund, DeWain Peterson, LaVerne Holt and Jerry Petersen.