She was born March 30, 1929, on the family farm in Granada, the daughter of Raymond and Esther (Bremer) Kruger. Helen attended school in Granada, Rose Creek and rural schools near Oakland. She

married Frank Pearson on March 2, 1952. They lived in the country near Lyle, where they raised four children. They later moved to Owatonna and Helen remained a stay-at-home mom. She was a member of 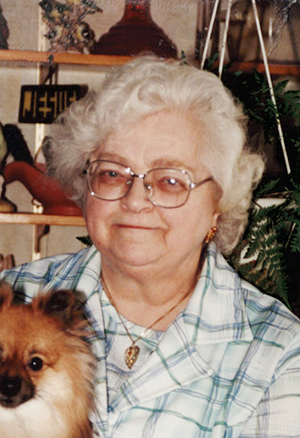 Our Savior’s Lutheran Church, where she enjoyed hosting Bible studies in her home for many years. Helen had a passion for collecting dolls, caring for her many plants, doing crafts with plastic canvas and crocheting. Helen was a very strong, independent woman. Her strong will to remain independent was the reason she was able to remain in her own home for so many years.

Visitation will be from 5 to 8 p.m. Friday at Michaelson Funeral Home and one hour prior to services at the church. Funeral services will be at 11 a.m. Saturday at Our Savior’s Lutheran Church. The Rev. John Weisenburger will officiate. Interment will be in the Oakland Lutheran Church Cemetery. Memorials are preferred to Steele County Food Shelf or to the donor’s choice. Helen’s loving smile will be missed by her family and friends. Blessed be her memory.