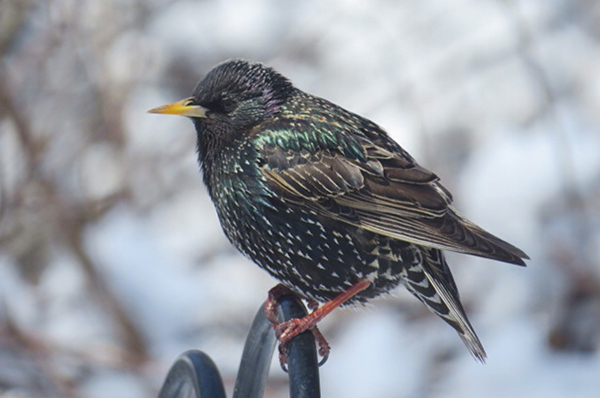 A starling with a yellow bill considers where to fly to next. – Al Batt/Albert Lea Tribune

“Everything is nearly copacetic. Some days, I think I’ve done nothing. Then I realize that nothing is impossible. I hate to sit down, because when I do, I think of something I should be doing — like taking a nap. I ate so much venison over the winter, I got a deer gut. I’ve been told that I’m sensitive and caring.”

“I lost my mood ring, so I don’t know how I feel about what you just said. Is your wife Irish? She wears green every day. That gold ring that you gave her has turned her finger green.”

“I spent over two hours at that claw machine before I got it,” I protest.

“My car doesn’t have a GPS. It has a globe instead. I hit a pothole that was so big, my car’s headlights switched places. I wonder if a good GPS would have warned me of its existence? I worry that I might get one that sounds like my mother. Ma and Pop have been married so long that she not only finishes his sentences, she starts them, too. She is his GPS. She tells him where to go.”

It was spring and the sap was stirring. Maybe I wasn’t stirring all that much, but I was picking up sticks from the yard. The whole world was my yard.

Killdeer, sentinel birds, disrupted what was a quiet neighborhood, loudly informing everyone of the presence of a suspicious character. Me. A tree unfurled its cape of blackbirds in response.

A great blue heron flew over, its slow wingbeats slow appeared controlled by the strings of a puppetmaster. My father referred to it as a shitepoke.

As some snowbirds (juncos) prepared to leave, human snowbirds in Texas, Arizona and Florida prepared to return to their home territories.

I love the smell of skunk in the morning. It’s a flashback to watching the movie “Apocalypse Now.”

Pocket gopher mounds dot the landscape. Their appearances mean that the frost has gone out of the ground in that area.

A cardinal sang, his red presence evident atop a small tree. He was twitterpated. Smitten by both the spring and a female cardinal. He announced his intentions so that all cardinals could hear, but so could predators. He, like males of every species, realized that there is a sense of danger yoked with love.

I know because I, too, am twitterpated.

“How do I know if I’m seeing a young bald eagle or golden eagle?” They’re the same size. Adult golden eagles are dark brown with a little white at the base of the tail and the crown and nape of the neck are a rich, golden-brown. They lack the white mottling of immature bald eagles. Young golden eagles often have white patches under the wing and at the base of the tail, but it’s always more clearly defined than the white mottling on the body and wings of immature bald eagles. Golden eagles’ legs are feathered to the feet. Bald eagles have bare legs.

“Where should I mount a bat house?” Bats find bat houses the same way that birds find birdhouses, by sight. It’s best to avoid shady locations and important that they receive the morning sun. Bat houses facing south or southeast and getting at least eight hours of sun are most likely to be successful. Bat houses should be placed at least 15 feet above the ground and 20 feet away from trees. The top third of the house could be painted a dark color with a latex paint to aid in warming here in the north.

“When should I put up the hummingbird feeder?” When you see hummingbirds or May 1, whichever comes first.

“The goldfinches are changing color. Do goldfinches molt more than once a year?” Molting is the process of replacing old feathers with new ones. The American goldfinch does two complete molts each year. The bird my father called the wild canary isn’t the only one to do this. The marsh wren and the bobolink are two others.

“Why did farmers want daylight saving time?” As a group, farmers were against daylight saving time. The lost hour of morning light meant rushing to get crops to market. I know from experience that dairy cows adjust to schedule shifts rather poorly. Putting clocks forward may benefit retailing, sports, trick-or-treaters and other activities that exploit sunlight after working hours, but daylight saving time was never adopted to benefit farmers. Ben Franklin suggested the basic idea in 1784, when he was ambassador to France. In a satirical letter to the Journal of Paris in which he claimed to be astonished, upon being awakened at 6 a.m., to find the sun already up. The thrifty Franklin wrote that he’d never seen the sun before noon and about how many candles something similar to daylight saving time could save. It was proposed by William Willett to the British Parliament in 1907 as a way to take advantage of the day’s light. Germany was the first country to implement it. We don’t save much on candle wax these days, maybe some on the electric bill. We spring ahead and fall back so that we’ll have more light for spending money.

“What would I discover about the cottonwoods if when I walked to the mailbox I listened to them instead of looked at them? What would I find out about the rain if I didn’t run inside? And is it possible that a sunrise would refresh me more than sleep?”— Hugh Prather

“A man sees in the world that he has in his heart.” — Goethe