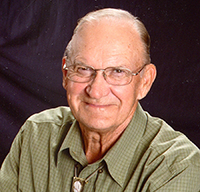 Kermit Dean Kalke was born on Dec. 31, 1936, in Osage, Iowa, to Alvin and Clarice (Huset) Kalke. He was baptized in Iowa and confirmed at St. Peter Lutheran Church of New Richland. Kermit graduated in 1955 from New Richland High School. He attended Mankato Commercial College for one year. Kermit served in the Army for six months of active duty and six years for the Army Reserves.

On April 26, 1959, he married Marie Erickson of Alden. They had three daughters in this marriage.

Kermit was in business with his dad, known as Kalke and Son Block and Tile and Kalke Sand and Gravel for many years. Later, he and LaVonne owned and operated Kalke Department Store. They also farmed for many years. Kermit drove a school bus and was a meat cutter for Wagners. He served on the church council, was a Sunday school teacher, served on the city council and was treasurer for New Richland Township.

Kermit had many interests. He enjoyed traveling, fishing, playing cards, going to Gophers basketball and football games, watching high school sports and going for walks with his dog, Riley. He enjoyed spending time in his wildlife area and having morning coffee with his friends, and he had a hobby of rock collecting. Most of all, he enjoyed moments together with his family.

Kermit was preceded in death by his parents, Alvin and Clarice.

Kermit will be very sadly missed.