Memorial services for Mary M. Wilder of Albert Lea will be at 11:30 a.m. Saturday at St. Theodore Catholic Church in Albert Lea. The Rev. Russell Scepaniak will officiate. Friends may greet the family one hour prior to the service at the church. Interment will be in St Casimir’s Cemetery in Wells.

Mary was born Feb. 2, 1924, the daughter of John and Louise (Kobernus) Kent. She graduated from public school and received her teacher’s certificate from the Mankato Normal School. She taught school for one year and in 1946 was united in marriage to Clement “Bud” Wilder. She was then a stay-at-home mother who raised their eight children. 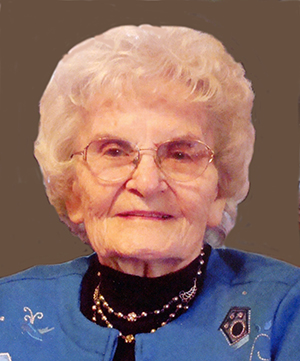 Mary was an active member of St. Theodore Catholic Church, working with the Catholic Church Women and the prayer chain. She enjoyed gardening, crocheting, canning, quilting and baking. She loved playing cards and cribbage,and her quiet time prayed the rosary.

She was preceded in death by her parents; husband, Bud; daughter, Joyce; and brothers George, Bill, Jack, Jerry, Harold, Don and Jim Kent.