Mildred Evelyn Bakke Bell was born Dec. 9, 1917, to Sigurd and Alma (Sether) Bakke in Bantry, North Dakota. In 1918 they moved to Upham, North Dakota, where her father had a blacksmith business. 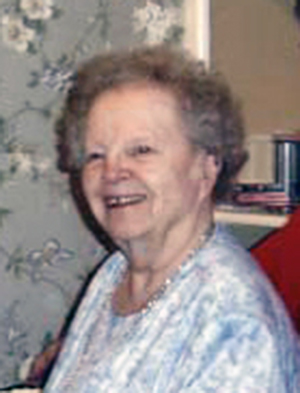 In 1926, after her father’s accidental death, she moved with her mother to Albert Lea. She graduated from Albert Lea High School in 1935 and went to work at Wilson & Co., where she became the secretary to the general manager. In July 1940 she married Clifford H .Bell. After his service in World War I, they purchased a farm in Myrtle. She continued to work at Wilson’s until 1952, the year of her daughter Kathryn’s, birth. In 1954 the family moved to Edson, Alberta, Canada. Millie and Cliff owned and operated Cashway Lumber, a lumber and builders supply for eight years. Millie also became mother to daughter, Janice.

In 1962 Millie and her family returned to Minnesota to a farm near Alden. She again worked at Wilson’s and as secretary to the president of Streater. In 1976, the couple built their retirement home in the country near Finlayson. Millie helped Cliff with his garden, canning and freezing the produce.

Millie was a lifelong Lutheran, confirmed and married at First Lutheran Church in Albert Lea. She spent many years as a Sunday school teacher and most recently as superintendent of Sunday school and vacation Bible school for several years at Peace Lutheran in Finlayson. Millie and Cliff were instrumental in establishing a Lutheran congregation in Edson during their years there. The ﬁrst services were in their living room. They later donated the lots upon which the church building was constructed.

Millie’s later years were spent in a duplex in Sandstone and then for 12 years at an assisted living apartment at Vindauga View in Chisago Lakes. Her last year was spent at Windy Acres Assisted Living in Forest Lake.

She was preceded in death by her husband in 2003; her parents; her daughter, Janice; and granddaughter, Trina.

She is survived by her daughter, Kitty, of North Branch; her granddaughter, Angela Blouin Sikel; great grandchildren; cousins; nieces and nephews.

Arrangements were made by Methven Funeral Home of Sandstone.