Gilberto A. Rodriguez, 64, pleaded guilty in front of District Court Judge Ross Leuning as part of a plea agreement. 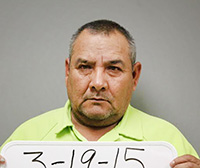 He was originally charged with one count of first-degree meth possession.

Under the plea agreement, Rodriguez faces a presumptive sentence of four years in prison.

According to court documents, Rodriguez was arrested March 19, 2015, after a trooper with the Minnesota State Patrol conducted a traffic stop on Interstate 35.

The trooper noticed a prepaid cellphone, known to be associated with criminal use to avoid law enforcement detection.

The trooper used a wrench to open the compressor and found 33 packages of what later field tested as meth. Each of the 33 packages weighed about a pound.

Rodriguez was reportedly the passenger in the vehicle.

His sentencing is scheduled for June 30.

Rodriguez’ lawyer, Bruce Rivers of Minneapolis, expects him to be deported once he serves his sentence.

Feliberto Rodriguez faces a presumptive sentence of four years in prison. His sentencing is scheduled for April 28.