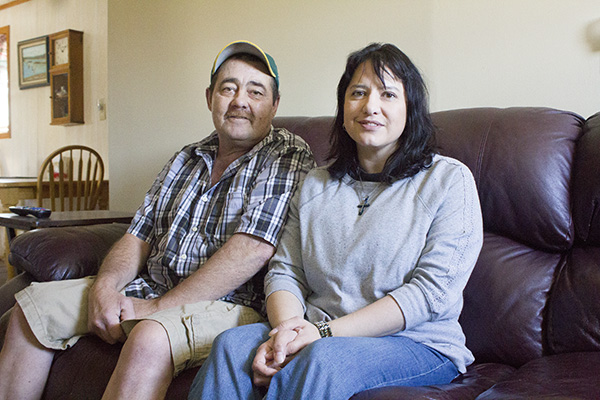 An Albert Lea man is hoping to complete his battle with kidney disease — a long, five-year battle that has nearly cost him his life.

Rick Wilder, who started dialysis more than five years ago and completed it Feb. 1, said the journey has not been easy so far.

“It has been nothing but hell,” he said.

A benefit will be Saturday at the Eagles Club in Albert Lea for Wilder. The event, which will also feature a bake sale and a live and silent auction, was organized to help him pay for his medical expenses.

He has had two toes amputated in the past year.

He said he was ready to give up before Lisa Hunter, a friend, handed him a pamphlet that included information for home dialysis.

He had told his mother, Mary Wilder, before she died in January 2015 that he was going to give up. He said she started crying and told him to not quit.

He has three children: Lucretia, Kayla and Zach.

He said Kayla, Zach and his father, Marvin Wilder, have helped him travel to Rochester for treatment during the process.

He said his faith has allowed him to survive his journey, noting a life-saving decision by a fellow church member also helped save his life.

She said God called her to help.

“I realized God was telling me I had two kidneys and Rick only had one,” she said.

Wilder said he is thankful for Pink’s donation.

“I owe Michelle,” he said. “She gave me a second chance at life.”

Pink also helped Wilder when he was on dialysis. She woke up at 5 a.m., three days a week for a few months to take Wilder to dialysis appointments at HealthReach, after Wilder’s home dialysis system went out.

He credits Pink for his improved condition.

“If I didn’t have her in my life, I would still be doing dialysis,” he said.

Wilder has also helped Pink in her life’s journey. He attends her Alcoholics Anonymous meetings to support her in staying sober. She has been sober for about six years.

AA provides him with a family-like atmosphere to discuss his health issues.

Medication has been expensive for Wilder. While he said insurance has covered most of the cost, he still has to pay out-of-pocket costs.

His situation has been made worse because he has not been able to work for the past 2 1/2 years due to his medical condition.

Wilder said though he has arthritis in his feet, knees and hips, he hopes to return to work within the next month.

“It’s getting better every day,” he said.

Wilder is working on a book for dialysis patients and hopes it will help people who are going through similar circumstances.