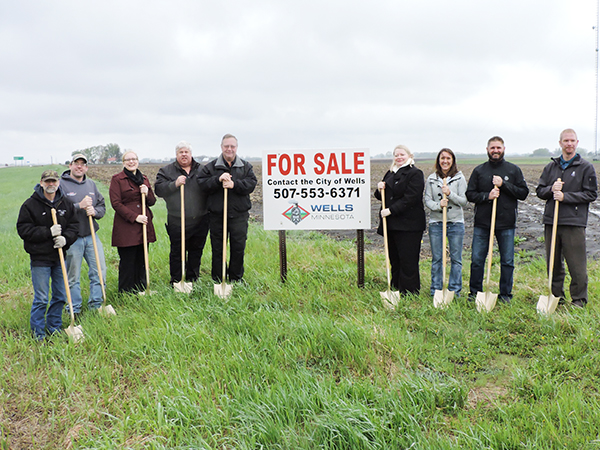 WELLS — A third time seems to be the charm for the city of Wells, who hosted a groundbreaking ceremony Thursday afternoon for a business park north of town.

City Administrator Robin Leslie said that development of the area, which is just across Minnesota State Highway 22 from Herman Manufacturing, had been tried previously, but failed both times due to funding issues. On both of those prior attempts, city leaders were looking at an industrial park.

The idea of focusing more on the business side of things started about a year ago, according to Wells Mayor Ron Gaines.

“We have found that there is more interest in a business park versus an industrial park,” Gaines said.

Ron’s Heating and Plumbing in Wells has expressed interested in building a facility at the site, and Leslie noted they have had a couple of retail businesses express a significant amount of interest in building in the park as well.

Earlier this year Wells received a $550,000 grant from Minnesota’s Transportation Economic Development program that would be utilized in the project. The funding would be used to create two turn lanes off Highway 22 and develop eight lots at the site, which is currently farmland.

The project is still in its preliminary stages. Water and sewer lines will need to be run to the property, and the City Council will have to decide how to pay for the rest of the project.

Leslie said she has done some number crunching and believes there would not be a significant increase to the city’s tax levy to fund the project. The council could vote to use some of the city’s cash reserves, and a bond payment is set to expire. Depending on how the council chooses to proceed, the expiring bond could be replaced with a new bond of a comparable amount.

While he believes Wells needs such a development, he has heard from some that don’t value the project as much as he does.

“I’ve heard a lot of comments that it’s a waste of time and a waste of money. Well, if you don’t move forward, you’re backing up. In this day and age that’s just the way it is,” Gaines said. “I would like to see Wells move forward, and if we can generate enough interest to get some business out there and pay for the infrastructure, I think it would be a great asset to the city.”