When, how long is the breeding season for gray, fox, red squirrels? 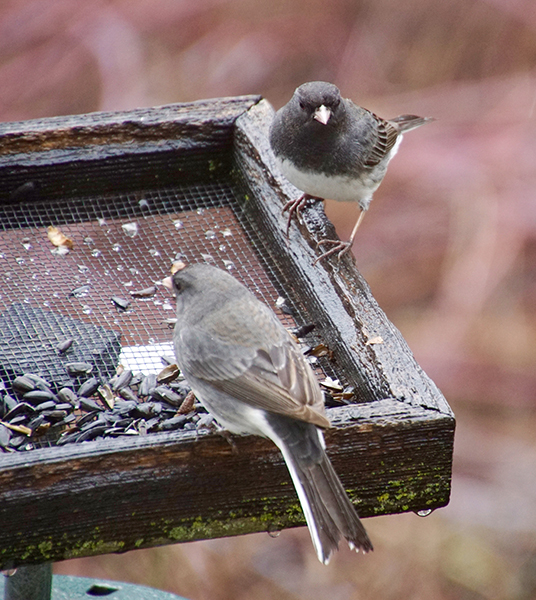 “Everything is nearly copacetic. It’s been so wet, I caught a bullhead in a mousetrap. Have you noticed that I’m wearing dark shirts every day?”

“It makes my teeth look whiter. Some folks think I’m lazy, but I’m not. I just enjoy doing nothing. As long as I can sit upright and take nourishment, I’m a happy non-camper who carries a fork in case I run into pie. I’ve been in the food court at the mall, serving on the jury of a man who was found guilty of eating a salad there. Speaking of food, Pop won’t use a computer. He doesn’t like anything with a chip in it that isn’t chocolate or potato. Pop doesn’t swear more than is absolutely necessary, but he swears that Ma isn’t feeding him properly. She’s too busy sending out a lot of her ‘just because’ cards. She doesn’t even know why she does that. I’m trying to watch what I eat, but it’s hard to see duringmidnight snacks. I’m not worried that eating less will depress me. If I want to fall into a deep, dark pit of despair, I’ll drive into a pothole.”

A lady beetle joined me in my office. I watched as it took a walk on the walled side.

I sat comfortably, drinking a cup of tea while observing that insect and looking out the window at the birds at the feeders. I call it multitasking. The birds seemed happy to be there. They were singing, telling all who listened that it’s a brand new day.

A couple of fine reports received from friends that were too good to keep to myself.

Joyce Tabor of Askov wrote that her father had taught her this, “Spring’s here,” said the robin.

“Where?” asked the crow.

Stephen Ingraham of Kennebunk, Maine wrote, “I hung a new thistle feeder, one of those long white socks full of seed things, with a bright yellow cap, but the finches still seem to prefer the labor of shelling black-oil sunflower seeds…tough breed of finches we have here in Maine. I saw my first finch on the sock today, but the other finches, from their perches on the sunflower feeder, were clearly looking askance … I think they might have been making mockery of thistle-feeding finches in general, and that pioneer finch in particular. I think, I’m pretty sure, in time’s sweet time the whole flock will become sock acclimated … thistle does go down a treat (so I hear, and if you are a finch) even in rugged Maine. I can wait. I already paid for the feeder.”

“I love my window bird feeder, but the suction cups are going bad. Is there anything I can do until I find replacements?” Placing the suction cups in boiling water for 2 to 3 minutes could return some elasticity. This makes the plastic more flexible. Wash the window thoroughly. The cups adhere best to clean, warm windows. Mount the feeder onto a window that had been warmed by the sun or use a hair dryer to warm the glass. Don’t use water in an effort to improve the suction. Instead, rub a little vegetable oil on the suction cups to enhance the suction. Burp the cups by pressing down on them to remove air.

The Bluebird Recovery Program Expo will be held on April 16 in Byron at the middle school, 601 Fourth St. NW. Registration begins at 8 a.m. with the program running from 9 a.m. to 4:30 p.m. There will be presentations, a live owl, vendors, exhibits and helpful advice. The BBRP’s mission statement reads, “To encourage, inspire, educate and assist individuals and organizations to become actively involved in the restoration and preservation efforts to sustain a healthy and expanding population of bluebirds and native cavity nesters.” To register, go to bbrp.org/homepage/expo.

An open house will be from 2­ to 5 p.m. April 24 at Good Earth Village. The local camp and retreat center invites all ages to explore the 500 acres at no cost, participate in camp activities and meet the staff. Good Earth Village is at 25303 Old Town Drive near Spring Valley.

“To be astonished is one of the surest ways of not growing old too quickly.”  — Colette

“We are by nature observers, and thereby learners. That is our permanent state.” — Emerson