Why are there so many crows? What can I plant for pollinators? 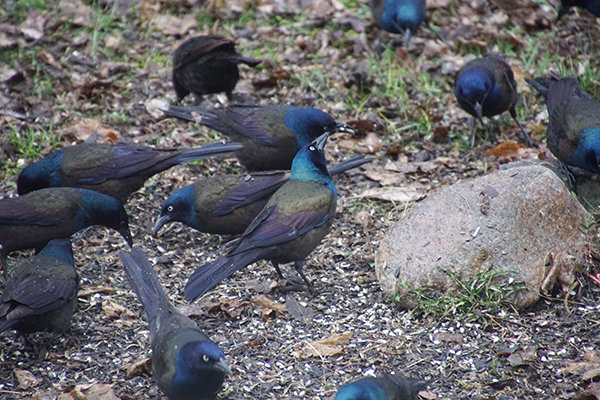 “Everything is nearly copacetic. I can resist all change except TV channels. I do love my clicker. I just had my dental appointment with Phil Eng. I always leave some floss between my teeth so that the dentist will know that I’ve been flossing. Still Bill and I went to his aunt’s funeral. When it’s all said and done, Still Bill says much more than he ever does. He needs self-walking shoes. The only time he exerts himself is when he’s eating. He’s a noted chowhound, a true plate licker. To him, everything is single serve. Funerals always make me as shaky as a dollar store ladder. I get as nervous as a grasshopper in a chicken coop.”

“Because of your feelings of grief and loss?” I say.

“No, it’s because of Gil Tee. He lurks at every local funeral, lying in wait to surprise every sinner he can find. Then I have to listen to his whole story about how he got religion after he broke into a church and was beaten senseless with a mop handle by the janitor. There were two caskets for Still Bill’s aunt.”

“She’d been a magician’s assistant.”

There was a brief quiet between prayer and song as I sat at a funeral. The dearly departed was a good guy who died much too young. The hush was broken by the call of a Eurasian collared-dove, an oft-repeated “koo-KOO-kook.” I found it comforting. The dove abides.

My wife and I were on our way in the car when three deer ran across the road in front of us. A crow was following them. I suspect the crow was herding them to a busy highway into the path of a large truck. That would result in dinner served for a hungry crow. Fast food.

I led a bird walk. As I marveled at how the binoculars turned the unfamiliar into the familiar, we saw things. Miles of red-winged blackbirds, yards of dark-eyed juncos and a few feet of Brewer’s blackbirds made for smiles of binocular toters.

I was sacking up some recycling — newspapers and garden catalogs. People who think they are in charge, should plant a garden. If I don’t whine about the winter, I get lemon-colored goldfinches to delight me in the spring. Sandhill cranes were heard — echoing calls bugling across the fields. Canada geese, constantly having a cow, sounded as if they were angry callers to talk radio. Spring announced itself.

I visited Rochester. Each time I do that, I stop at Silver Lake. There are Canada geese there. I need to at least step near, if not into, some Canada goose poop. It’s part of the Rochester experience.

Tom Christenson of Albert Lea asked why there are so many crows. Crows congregate in roosts large enough to remind people of Alfred Hitchcock’s movie “The Birds.” Many bird species roost in groups. Crows roosts are primarily done in fall and winter. Most breeding crows sleep on territories during the breeding season and join roosts afterward. Crows congregate in a favorable spot that offers protection from predators and the elements. It’s a crow hotel. There is safety in numbers. Some scientists speculate that information about fruitful foraging areas is transmitted by allowing an individual down on its luck to follow successful crows to a good food source. The best roosting sites have food available the first and last thing in the day. Such abundant sources might be landfills, composting facilities or farm fields. Before roosting, crows gather away from the final roosting site, usually an hour or two before darkness, and vocalize, chase and tussle. Why roost in a city? The Federal Migratory Bird Treaty Act of 1918 regulates the hunting of crows and there is a prohibition on the discharge of firearms within city limits. Cities are warmer than rural areas and offer large trees. Great horned owl populations should be lower; the owls take adult and nestling crows. Owls see better in the dark than do crows. Artificial light aids crows in watching for owls. The crows have nightlights.

“How much sap does a maple tree produce? Maple (including box elder) trees are most commonly tapped, but birch and walnut trees can be. I often see birch syrup in Alaska. The volume of sap produced during one season varies from 10 to 20 gallons per tap, depending on the tree, weather, length of the season and method of collection. A single tree could have more than one tap, depending on the tree’s size and health. It takes approximately 40 gallons of sap to produce one gallon of syrup.

Nature on the radio

Please join me as I share nature’s stories after the 10 o’clock news every Tuesday morning right on KMSU, 89.7 or 91.3 on the FM dial. Look to KTOE.com and Talk of the Town with Pete Steiner to find archived podcasts of the shows on KTOE.

“It doesn’t make a difference what temperature a room is, it’s always room temperature.” — Steven Wright

“Adopt the pace of nature: Her secret is patience.” — Ralph Waldo Emerson