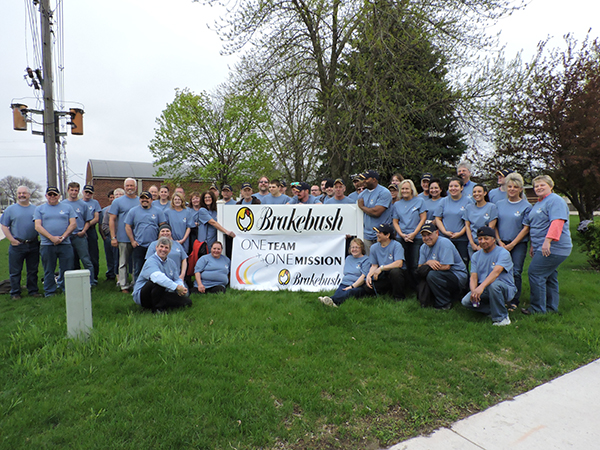 Employees of the former Wells Food Processing plant come together to celebrate the company being bought out by Brakebush. – Kelly Wassenberg/Albert Lea Tribune

“We have worked together with Wells on various projects over this past year and found the team members a pleasure to work with,” Brakebush President Scott Sanders said in a press release. “We sensed right away that we had a partner in Wells that supports the same commitment to quality that we stand for.”

Sanders said the company was enthusiastic at the prospect of acquiring the Wells plant and pushed forward quickly to reach a purchase agreement with North Central Equity.

“Adding the Wells facility puts us in a great position to continue to grow our existing customer base and aggressively pursue new business,” Sanders said.

The Wells Food Processing plant had worked as a co-packer for other companies, including Brakebush, prior to the sale. A co-packer is someone who accommodates another company’s overflow needs. The companies give the co-packer all the recipes and protocols needed to make a product, and the product is then made at that facility. In this case, Wells Food Processing primarily made chicken strips and chicken nuggets.

The corporate headquarters of Brakebush is in Westfield, Wisconsin, a community of about 1,200 residents.

“We believe that Wells and the surrounding communities share the similar rural Midwestern values and work ethic that have made our company successful and an integral part of our community,” Sanders said.

The company also operates a raw portioning plant in Irving, Texas, which the company acquired three years ago. In the time since, Brakebush has more than doubled the business. The facility now has a greater processing capacity and the number of employees at the site increased from 315 to over 660, according to a press release.

Brakebush was founded in 1925 by brothers William and Otto Brakebush and is still owned and operated by the family. The business currently has 975 employees at its processing facility and corporate headquarters in Westfield.

“Although more urban, the Irving team has fit in great with the Westfield team, and we anticipate the same with Wells,” Sanders said.

Brakebush is planning to add a second production shift at the Wells facility by the middle of July. It is anticipated that this should add an additional 25 jobs, bringing the total employment of the facility up to about 70 people.

The 100,000-square-foot facility also has room to grow. There is space available to add more processing lines in the future, which could potentially increase the product output of the facility and would require more employees.

This is the fourth owner of the plant in a little over a decade. In 2004, the facility was used by ConAgra and employed over 200 workers. The plant laid vacant until purchased by businessman Stephen Singleteary. Many upgrades were made to the building, and a couple dozen employees were hired only to be laid off a few months later. Singleteary Food Solutions was foreclosed on in February 2014 before being purchased by North Central Equity in January 2015.