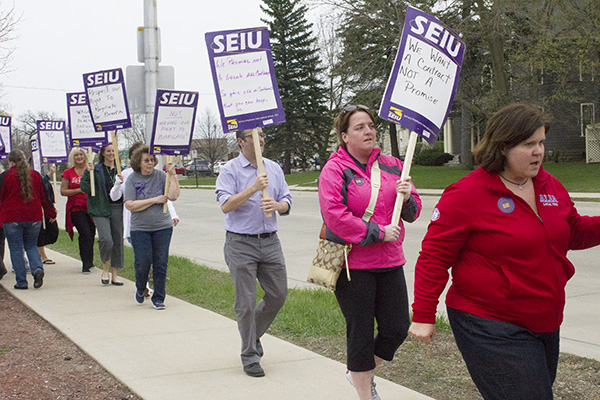 A few dozen Mayo Clinic Health System in Albert Lea maintenance workers, other union members and members of the public picketed outside the hospital Monday afternoon for a second time to highlight their concerns with a proposed union contract.

The seven maintenance workers, represented by Service Employees International Union Health Care Minnesota, are opposing language in the contract that would allow Mayo Clinic Health System to make changes to the union’s benefits during the contract’s three-year period. Union members are concerned that the change in the contract would eliminate negotiation. The members want their benefits secured in writing.

Maintenance worker and SEIU member Gary Wichmann said the change could lead to a loss of benefits or jobs.

The picketers marched up and down the sidewalk outside of the hospital on Fountain Street while chanting their views on the contract process.

He said the hospital will not bargain with them until they accept the language change.

Mayo Clinic Health System has been in contract discussions with the maintenance employees since August.

He said by disputing the contract language, SEIU is asking for special terms for just their group.

“The union has chosen to leave its members working without a contract while they argue over the language — not the salary or benefits,” he said.

He said he wants the maintenance engineers to receive the same benefits their co-workers receive, noting hospital officials continue to meet with SEIU in good faith with hopes of reaching a contract agreement acceptable to all parties.

“We are committed to ensuring our patients receive the safest and highest quality health care,” he said.

Ciota said he is confident they will work out an agreement, noting there is no specific deadline they will be working under.

He said the negotiation process has not been unusually long, noting they do not have another bargaining session scheduled.

“This is about all of us coming together as a broader community,” Waylett said. “We’re all in this together. This is a community; we all support each other.”