Memorial services for Bette E. Schaub of Fairmont, formerly of Albert Lea, will be at 11 am, Saturday at Lakeview Funeral Home in Fairmont. Interment will be in Graceland Cemetery in Albert Lea. Visitation will take place at the funeral home one hour prior to the service. Bette passed away Sunday, May 8, 2016, at Lakeview Methodist Health Care Center in Fairmont. Lakeview Funeral Home and Cremation Service of Fairmont is in charge of arrangements. 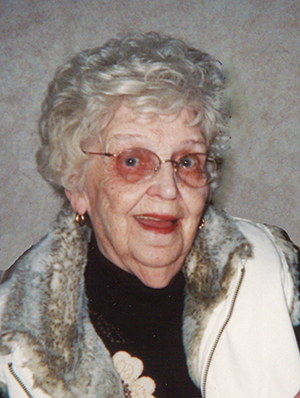 Betty Elaine (Branby) Schaub was born on Oct. 4, 1927, in Superior, Wisconsin, the daughter of Gerhard and Esther (Helland) Branby. She lived her childhood in Glenwood, graduating from Glenwood High School in 1945.

On  April 12, 1946, Bette was united in marriage to Gerald R. Schaub in Glenwood. They would have five children: Gary, Nancy, Mark, Randy and Dawn. Bette and Ged would live in Glenwood and Morris but spent most of their adult lives in Albert Lea.

Bette held jobs as a telephone operator, retail sales, dairy store manager, food supervisor and cook. She was also a stay-at-home mother until her children could attend school. Bette held her position as a cook at the Elk’s Club in Albert Lea until finally retiring for the last time at 80 years old.

Bette was a member of the Veterans of Foreign Wars and American Legion Women’s Auxiliaries and the Eagles and Elks Clubs in Albert Lea. When her children were in school, she taught Sunday school at First Lutheran Church, and later, Grace Lutheran Church in Albert Lea. In her spare time, Bette enjoyed playing bingo and going to the casino. She loved flowers, plants and her pets. Bette was an avid fan of the Minnesota Twins and Vikings.