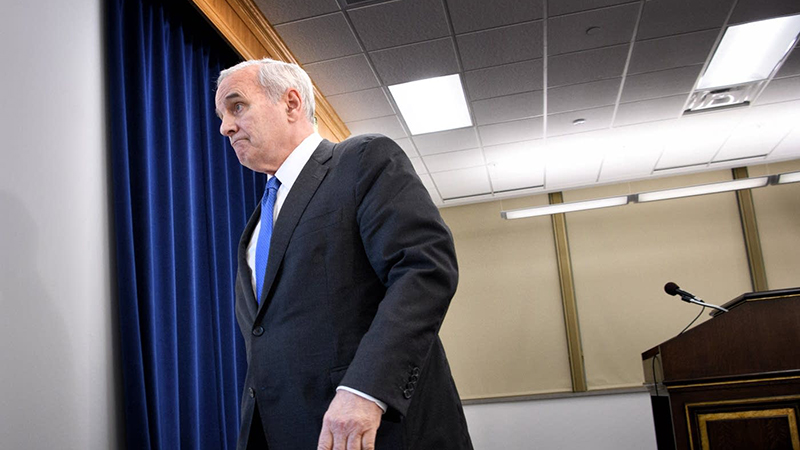 Gov. Mark Dayton leaves the podium after addressing the legislature’s failure to pass a bonding or transit bill on Monday. - Glen Stubbe/Star Tribune via AP

Gov. Mark Dayton on Monday was sharply critical of the budget and tax agreements made by the Legislature in the waning hours of the session Sunday night.

The governor slammed lawmakers for failing to finish major legislation, including a transportation bill that would have authorized hundreds of millions in construction projects. Dayton said the Legislature should have funded projects he requested at the University of Minnesota and MnSCU.

He was particularly angry over the House’s proposal not to fund a health sciences education building requested by the U, which he called one of the state’s most important institutions. Dayton proposed $66.7 million toward the $100 million building, according to a University of Minnesota breakdown.

Dayton said he was told that some lawmakers have a “problem” with the university to which the governor responded: “Grow up and get over it.”

The House bonding proposal included $81.6 million for three U of M projects. The Chemical Sciences and Advanced Materials Building in Duluth was proposed to receive $27.2 million. The House also outlined $107.5 million for Minnesota State Colleges and Universities’ improvements.

Republican and Democratic leaders say they would like to continue their work in a special session. But Dayton said he’s not ready to call one yet and it certainly would not happen within the next 48 hours.

“I’ve given it 14 hours and 4 minutes of thought and I haven’t come to any conclusions one way or another. And again I would want to meet in the days ahead with legislative leaders.”

House Speaker Kurt Daudt, R-Zimmerman, said Dayton should call a session soon, “while everybody’s paying attention, now while it’s fresh in their minds, and now while we’re still all here.”

Overall, Dayton told reporters it was “disappointing to say the least” that the session ended without a transportation or public works projects bill, saying those amounted to “serious, unmet need of Minnesota.”

He also said he had no idea how the decision of a tax cut of around $35 million for tobacco products was made. “I don’t know where it came from I don’t know who was behind it but it was very, very distressing.”

Here’s what the governor had to say on other topics:

Dayton said he was pleased the Legislature backed $25 million for voluntary preschool programs, calling the programs “enormously popular” wherever they’ve been put into place.

“I’m very disappointed that the Southwest light rail line is being made a campaign slogan for those who oppose public transit in the metropolitan area,” he said, adding it was “too important for people to be playing narrow-minded political games”

Dayton ripped a provision approved by lawmakers that would end the Minnesota State High School League’s sales tax exemption on tickets and admissions to league-sponsored events, saying it would cost the league $800,000 that it uses now to help fund high school sports in Minnesota.

Dayton said the league was being punished by lawmakers for a policy allowing transgender athletes to play on the team that best aligns with their gender identity. “They’re going to penalize all those kids out there who can’t (afford to) play sports” because of the league’s position, Dayton said.

“For the Legislature to say we don’t like a decision you made thoughtfully and carefully, so we’re going to shaft kids is beyond the bounds of responsible governance,” he said.