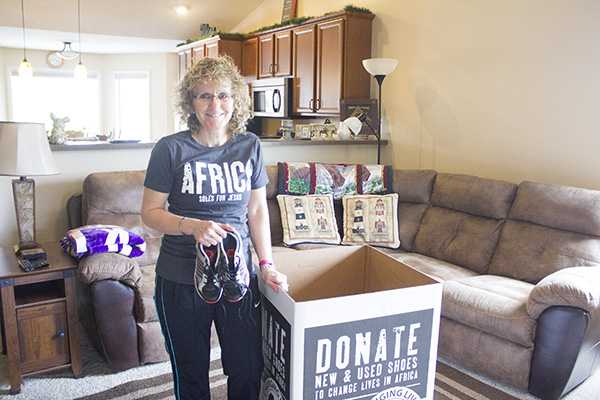 Laurie Neff is looking for shoe donations so she can give shoes to those in need. – Sam Wilmes/Albert Lea Tribune

An Albert Lea woman will travel to Africa later this year to donate needed shoes to underserved Africans.

Laurie Neff, 55, plans to travel to Kenya in late December to deliver shoes to four villages. Neff and a group of 14 people will wash the villagers’ feet, place shoes on their feet and pray.

She will travel with Soles for Jesus, a Wisconsin-based Christian organization that distributes shoes to the underserved in sub-Saharan Africa.

Donations will be accepted at Albert Lea Grizzlies football games Saturday and May 28 — both at Frank Hall Park. Donations can also be delivered to First Presbyterian Church — 308 Water St. — or by contacting Neff at 507-318-9072.

All shoe donations are accepted.

Neff said she has wanted to go on mission trips for years, noting she has followed Soles for Jesus, for a couple of years.

She said though the shoes could help recipients avoid parasites, diseases and amputations, she will also benefit by giving.

“I think I’ll get more out of it than they will,” she said.

She said she would like to collect 600 pairs of shoes before they are sent to Wisconsin around June 1 before being sent to Africa. Neff said she has collected about 78 pairs so far.

Neff traveled to Jamaica three years ago on a mission trip with First Presbyterian Church and helped provide meals, sang songs, played games and provided a source of comfort to the local people.

“It was very touching,” Neff said.

She said she formed a connection with the local population.

“You just wish you could take them back with you,” she said.

She plans on going back to Jamaica next year.

Neff, a member of First Presbyterian Church, said her faith guides her in helping others. She said she wants to show people Jesus by caring for them, loving them, reaching out and listening to their needs.

She said she has donated five pairs of shoes so far, noting she sometimes feels emotional when she gives to others.

“Sometimes it brings tears to my eyes,” she said. “It makes me feel good that I am helping other people.”

Neff, 55, is married to John, and  is a mother of three — Kellan, Corey and Kamel Bowman — who are each in the military.