An Albert Lea man has filed for election to be 3rd Ward councilor.

Jason Howland, of 1133 Plainview Lane, has lived in Albert Lea for nearly 20 years. 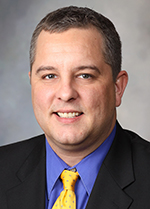 Formerly a television news and sports anchor at KAAL for 13 years, Howland — who works in public affairs for Mayo Clinic in Rochester — said he loves Albert Lea and the people who live in it, noting there is a reason why he continues to live in Albert Lea while working in other towns.

He said he wants to help make Albert Lea a great place to live, work and play, noting he was encouraged by people he trusts and friends and family to run for office.

He said the city needs progressive, fiscally responsible and passionate leaders — traits he said he brings.

If elected, he hopes to maintain infrastructure, drive business growth in Albert Lea and build a stronger workforce.

The Riceville, Iowa, native graduated from Iowa State University with a bachelor’s degree in journalism and mass communications.

Howland said though this is the first time he is running for elected office, he has leadership experience and cited his experience on the Albert Lea Community Theatre board of directors as a member and as president.