Funeral services for Harold Hanson will be at 10 a.m. Saturday at Trinity Lutheran Church in Albert Lea. The Rev. Gary Harris will officiate. Visitation will be from 5 to 7 p.m. Friday at the Bonnerup Funeral Service chapel, as well as one hour prior to the service at the church. Interment will take place at Hillcrest Cemetery. 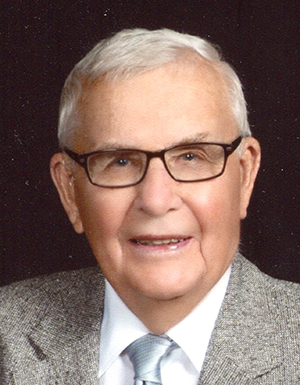 Harold Robert Hanson was born April 5, 1928, in Freeborn County to George and Lila (Jenson) Hanson. He was a graduate of Albert Lea High School. On June 25, 1950, he was married to Patricia Skophammer at Trinity Lutheran Church in Albert Lea.

Harold worked for Interstate Power Co. for 38 years before retiring in 1990.

Harold and Pat spent many years camping and traveling around the country. They visited cousins in Norway, traveled to Denmark and Alaska and also traveled on the Alcan Highway.

Harold enjoyed many fishing trips up north with his father-in-law, Grant, and his best friend, Lee Abben. They did not always bring home any fish, but always had a great time. Harold was always thrilled when his father-in-law told him he could drive the car and Grant would do the cooking for him and Lee.

Harold was 6 years old when his father died so Grant and Harold shared a love of gardening and sports. He enjoyed wood working — especially making many clocks. Harold was a member of Freeborn County Genealogy Society and Freeborn County Historical Museum. He was an active member of Trinity Lutheran Church. He served on the church council as treasurer and was historian for the church. He was an usher at the church for over 50 years and was active in Bible study.

Harold was a lifetime member of Trinity Lutheran Church was baptized and confirmed there. Harold and Pat were married for 65 years and raised four children.

He was preceded in death by his parents; one baby daughter; sister, Lavon Hanson; brothers-in-law Jack, Jim and Bob Skophammer; and sisters-in-law Alice and Laura Skophammer.

Harold will be greatly missed by his family and many friends.

In lieu of flowers, memorials are preferred to  American Heart Association, Trinity Lutheran Church or the charity of the donor’s choice.