James W. Hassing, 81, of Wells died Friday, April 29, 2016, at Good Samaritan Society of Albert Lea. Mass of Christian Burial will be Saturday, May 7, 2016 at 11 a.m. at St. Casimir Catholic Church in Wells. The Rev. Andrew Vogel will officiate. Visitation will be from 5 to 8 p.m. Friday, at Bruss-Heitner Funeral Home in Wells and will continue one hour prior to the service at the church. Military honors will be accorded by the Wells Color Guard. Interment will be at Rosehill Cemetery in Wells. Bruss-Heitner Funeral Home is assisting the family. To leave online condolences, please visit www.brussheitner.com. Memorials are preferred to the donor’s choice. 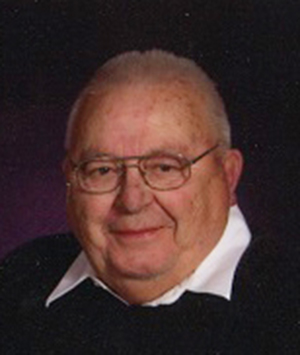 Jim was born August 29, 1934, in Wells, the son of Rudolph and Ruth (Drake) Hassing. He was a lifelong resident of Wells and grew up working with his family in the tiling business.

Jim graduated from Wells High School in 1952 and later from the University of Minnesota.  He proudly served in the Army Reserves. Jim was united in marriage Dec. 27, 1961, to Marie Rykhus in St. Peter. Jim spent his life raising Angus cattle and farming. For many years he was a sales representative for Pioneer Seed. Jim was an active member of the American Angus Association, Minnesota State Angus Association, Minnesota Livestock Breeders Association, and Minnesota Beef Cattle Improvement Association. He was also a member of St. Casimir Catholic Church and Wells American Legion. Jim served on the local school board, Faribault County Extension Committee, Faribault County Agricultural Stabilization and Conservation Service, Faribault County Planning and Zoning and Variance, Faribault-Martin County Human Services, Dunbar Township Board and Wells Ambulance Board.

He is preceded in death by his parents; sister, Jacqueline Gander; and two brothers-in-law.