Born Aug. 3, 1940, in Albert Lea, Joyce was the daughter of James and Lila (Nelson) Rasmussen. She graduated from Albert Lea High School in 1959 and married Mervin Dale Hanson on June 23, 1961, in Albert Lea. Joyce owned and operated Du Drop Inn Restaurant in New Richland. She enjoyed camping, reading and socializing. 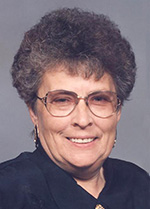 She is survived by her husband, Mervin, of Waseca; daughters Sandy (Bill) Hacker of New Richland, Laurie (Tom) Bergeson of Northfield, Judy (Warren) Olsen of Wiley, Texas, and Vicki (Willy) Scrabeck of Janesville; eight grandchildren; and three great-grandchildren. She is also survived by her mother, Lila Rasmussen, of Ellendale; and brother, Jerry (Gail) Rasmussen, of Albert Lea.

She was preceded in death by her father and numerous aunts and uncles.

Funeral services will be at 2 p.m. Friday at Dennis Funeral and Cremation Services in Waseca.  Visitation will be one hour before services at the funeral home.