Gillespie, owner of Web Room Technologies, an Albert Lea-based computer service center, said he is running for office to “help make Albert Lea great again,” by working with other councilors, Mayor Vern Rasmussen Jr., members of the public and organizations to help the community. 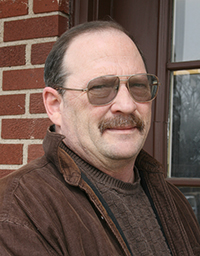 He said if elected, he will be available throughout the day or in evenings to listen to concerns, noting people are welcome to come into his business on Marshall Street to discuss any issues they have.

He hopes to help develop Blazing Star Landing, noting he thinks the site has sat empty for too long.

Gillespie is a member at large of Veterans of Foreign Wars Post 15024, is an experienced volunteer and has been involved with the Albert Lea Hockey Association for 20 years.

A Dayton, Missouri, native, Gillespie graduated high school in Archie, Missouri, and served in the United States Army before being honorably discharged.

He studied computer science and programming at University of Missouri-Kansas City, where he earned a Bachelor of Science degree.

Gillespie said he moved to Albert Lea to pursue a career advancement and promotion, noting he takes pride that his children and grandchildren have served the nation.

Soil and Water
Conservation Board