An Albert Lea resident has filed for election in Ward 5.

Robert Rasmussen, 39, of 603 St. Peter Ave., wants to see the city move beyond what he said is its stereotype of being a retirement community.

“I like to see any positive changes in Albert Lea,” Rasmussen said. 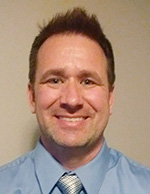 Rasmussen — who grew up in Albert Lea — said he is friends with current 1st Ward Councilor John Schulte V, and his uncle, Glen Mathiason, is a Freeborn County commissioner.

He wants to see Blazing Star Landing developed, noting he thinks that will attract young people.

Rasmussen — who served seven years with the Army National Guard as a sergeant — is a machine operator at Hormel Foods in Austin, where he serves on the safety committee.

He said his service in different facets shows he wants to give back to the community and help those around him, on a local and larger level.

He claimed Albert Lea can grow, though he noted it might take time to get there. He said dredging Fountain Lake would help grow the community.

Rasmussen’s wife, Camille, 31, is financial coordinator at Potlach & Mitchell Dental Office in Austin and is involved with a parent teacher organization in Albert Lea.