Emilio Suarez, 51, of Miami pleaded guilty Friday to one count of receiving or possessing financial transaction card fraud. The charge states Suarez possessed, with the intent to use, two or more cards issued to the name of another person.

As part of a plea agreement with the Freeborn County Attorney’s Office, a second count of financial transaction card fraud is expected to be dismissed.

Suarez was arrested in March after he was found in a rental vehicle with dozens of cloned credit cards and about $5,000 of products purchased with the cards. There was everything from an iPhone, a Go-Pro camera, a computer, a drone, alcohol, cologne and gift cards. 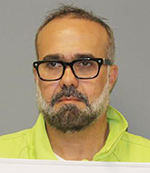 He had reportedly fled from Hy-Vee after using a fraudulent card at both the grocery store and the gas station.

He reportedly victimized residents of Rochester, Mankato, Fairmont, Apple Valley, Lakeville and other communities and was believed to have been part of a larger credit card fraud scheme across the country.

Suarez is slated to be sentenced June 16.