Funeral services for Marjorie Belle Anderson will be at 2 p.m. Monday, June 6, at Grace Lutheran Church. The Rev. Janet White will officiate. Interment will be at Lakewood Cemetery. Visitation will be from 5 to 7 p.m. Sunday at Bayview/Freeborn Funeral Home and one hour prior to the service at the church. Online condolences are welcome at www.bayviewfuneral.com. 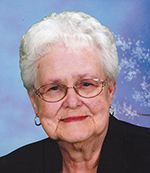 Marjorie Belle Anderson was born Feb. 10, 1929, in Avoca, Iowa, the daughter of Walter and Maud (Fish) Page. She grew up and attended school in Avoca. After high school, Marjorie moved to Omaha, Nebraska, and worked for Armour Foods and Kellogg’s. While she lived in Omaha, she met the love of her life, Virgil Lee Anderson, at a roller rink. Three weeks later on July 4, 1949, Marjorie and Virgil were married in Albert Lea. The couple made their home in Albert Lea and were blessed with four children. Marjorie was a member of Grace Lutheran Church. She enjoyed bowling, playing cards, reading and watching “Wheel of Fortune.” Most of all, Marjorie loved babysitting her grandchildren and great-grandchildren.