Maryetta Lorraine (Olsen) Hylle, 87, of New Brighton, formerly of Austin, passed away Sunday, May 15, 2016, at a nursing facility in New Brighton. 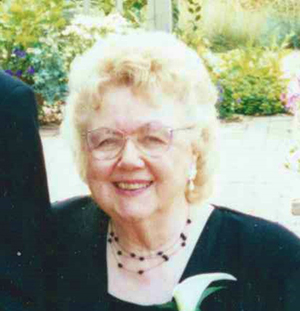 On Jan. 13, 1945, Maryetta married Arthur M. Hylle at Calgary Baptist Church in Albert Lea. Arthur served in the United States Navy from 1942 to 1945. After Arthur’s time of service they made their home in Austin. Maryetta was a homemaker and mother to three children, two daughters and a son. Her greatest joy was spending time with her children, five grandchildren and six great-grandchildren.

When her children were young they had a cabin on Beaver Lake where they spent many fun filled years. Maryetta enjoyed square dancing, coffee parties with friends and Olsen family gatherings — especially the annual Olsen family reunions in Owatonna.

After Arthur’s death she moved to Minneapolis to be closer to her children.

She is preceded in death by her parents; 10 brothers and sisters; and her husband, Arthur, who died April 25, 2000.

A private memorial service for immediate family will take place.