He was born Feb. 22, 1934, in Canisteo Township in Dodge County, the son of Arthur and Hilda (Johnson) Hanson. Maynard graduated from Austin High School in 1952 and later went to work for the school system as a construction foreman, retiring in 1996 after 37 years. In 1953, he enlisted in the United States Air Force, serving his country until 1957. On June 25, 1954, he was united in marriage to Carole Van Pelt at St. Olaf Lutheran Church in Austin. The couple moved to Florida for one year during Maynard’s military service, then Maynard served a tour of duty in Iceland. Before returning to Austin, the couple lived in Virginia, where their first child was born.  Carole passed away in September 2012.

A member of Our Savior’s Lutheran Church in Austin, Maynard taught Sunday school, directed the church high school choir and served on many boards and committees. He loved music, playing bass and singing vocals in several local bands, including his own group, The Rhythm Section, and the Miss Austin and Miss Minnesota pageant bands. He was a charter member of Austin Big Band and served as a director of  Austin City Employees Credit Union for many years. Maynard and Carole loved to take day trips. Maynard’s biggest joy was family get-togethers. He also enjoyed socializing at the Eagles Club and was a member of the American Legion. His new friends at Village Cooperative and the staff at Comforcare and St. Mark’s enriched the last few years of his life. 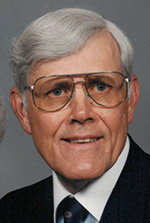 Maynard was preceded in death by his parents Arthur and Hilda Hanson; his wife, Carole Hanson; two brothers, Norman and Arleigh; and his sister and brother-in-law Betty (Richard) White.

Funeral services will be at 1 p.m. Friday at Our Savior’s Lutheran Church in Austin. Intern Pastor Lisa Meshke will officiate. Visitation will be from 5 to 7 p.m. Thursday at Worlein Funeral Home and one hour prior to the service at the church. Interment will be in Oakwood Cemetery. Memorials are preferred to the American Heart Association, American Lung Association, Our Savior’s Lutheran Church in Austin or recipient of the donor’s choice.

Services were prearranged and will be performed by Worlein Funeral Home. Condolences may be expressed to the family online at www.worlein.com.