Funeral services for Melvin Bangert will be at 10 a.m. Saturday at Grace Lutheran Church in Albert Lea. The Rev. Janet White will officiate. Interment will be in Alden Cemetery. Visitation will be from 5 to 7 p.m. Friday at Bonnerup Funeral Service in Albert Lea, and again one hour prior to the service at church.

Melvin was born May 13, 1928, to Fred and Martha (Schmidt) Bangert near Conger. Mel was raised on the rural Conger farm as one of 14 children. He graduated from Alden High School and married his high school sweetheart, Peggy L. Johnson, on June 6, 1948, at Grace Lutheran Church in Alden.

Mel was a police officer in Albert Lea for 27 years. He was the canine handler of Shep for seven years before becoming lieutenant. After retirement, Mel lived in Arizona with his wife for 10 years from 1988 to 1998. His hobbies included carpentry — building three total houses — riding motorcycle and traveling the country with his wife, and spending time with his grandchildren and great-grandchildren. 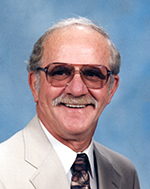