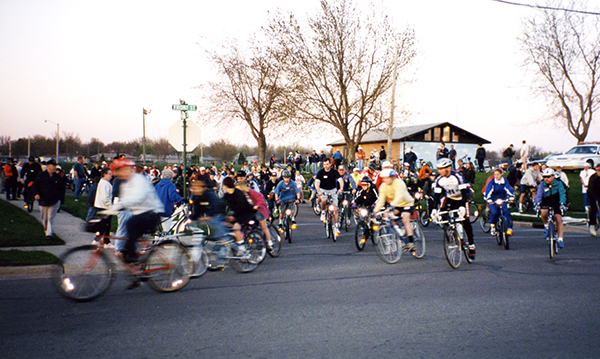 A flood of riders takes off in a former Freeborn County Bike-A-Thon take off from the warming house near Sibley Elementary School. – Provided

Saturday marks the 44th and final year for the Bike-A-Thon. Here are some stories and photos of the event from years past.

Community generosity made event a success

I am proud of our community. Without their generous support we could not have accomplished this successful event. Thank you — we will win in the fight against cancer.

A ride in the first ever Bike-A-Thon

I remember riding in my first Bike-A-Thon in what I believe was the first year it was held. I was riding my red Schwinn one-speed Little Shaver bicycle. I dreaded getting up so early knowing it was going to be pretty cold, but the chance to ride with my friends got me going. My mom had bought a bag of chips to send along, and we had tried to clip it on the bike, which didn’t work, so I must have carried them as best I could. Being so many years ago, I don’t remember much about the ride, but I do remember my friends getting ahead of me on the stretch heading into Hayward and I stopped to get picked up, with a tear or two in my eyes. I do remember my parents saying how proud they were for my riding 36 miles.

My last attempt at the full route occurred around 30 years ago after I had started at the Tribune as a sales representative. The challenge went out between the Tribune, KATE Radio and the Freeborn County Shopper on who they could get to ride and raise the most money. Never having been someone to say no to help raise money for a great cause, I said I would. The Tribune ran a big ad with my picture on a bike, and I raised quite a bit of money. Little did I know that my competitors would be driving mopeds along the route. I made it to Hartland, but the strong wind that saw me ride about five miles in an hour made me mentally exhausted, and I gave it up. I believe it was 76 miles. There was some controversy there, and I remember publisher Don Jones writing a column scolding the others with a picture of a bike and a moped alongside the column.

As a member of the Albert Lea Jaycees, I was part of a group that rode the team ride to Glenville a few years until I became over 40 years old and was not in the organization anymore.

Little did I realize that cancer would hit my family as my mother had a cancerous kidney removed a little more that 10 years ago and my wife is a colon cancer survivor. All those pennies collected as a kid and the tears shed many years ago on a country road near Hayward have been a small part of the tremendous amount of money this event has raised over 44 years for the fight against cancer. Thanks to all who have taken part and thanks for all the volunteers who have made it possible. 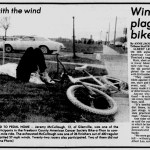 Wind plagued riders in the Freeborn County Bike-A-Thon in 1987. The Tribune in this article featured an exhausted 12-year-old boy named Jeremy McCullough who was one of 26 finishers out of 400 riders. -Provided 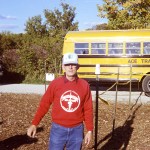 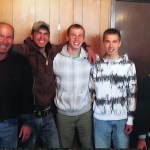 From left are Paul, Dan, Gabriel, Eli and Michael Dyvig before the start of the 2010 Freeborn County Bike-A-Thon. – Provided 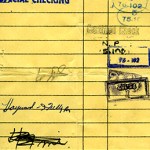 The ride card for Tom Jones the first year of the Bike-A-Thon shows he rode 36 miles. – Provided 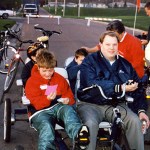 A friend borrowed Dan Dorman this four-wheeler for one year of the Bike-A-Thon, but it did not go far because of too little leg power. The group still had fun, however. With him on the ride were his sons Matt and Chris and friend Jacob Winkels. – Provided 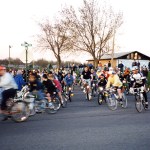 A flood of riders takes off in a former Freeborn County Bike-A-Thon take off from the warming house near Sibley Elementary School. – Provided 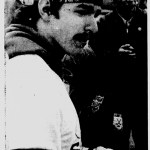 This photo showcases one of the finishers of an earlier Bike-A-Thon. – Provided 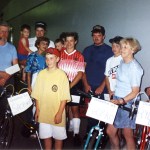 Florence Brandt, second from right, participated in the Freeborn County Bike-A-Thon 14 years and completed the 100 miles each year except for one when the event was canceled due to weather. In this photo, in the 1990s, she won a bike because she was one of the top three people to raise funds. – Provided 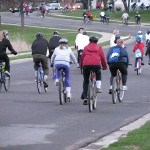 Betty Friedman submitted this photo of riders from a former Bike-A-Thon. She said her family has been involved in the event for years, both as riders and volunteers. This year, they will have three riders and three traffic-monitoring volunteers, as well as other family members coming for the day to support the riders and honor their loved ones who have died or are suffering from cancer. She said the riders have experienced every weather condition imaginable, from snow, rain and winds to sunny conditions. – Provided 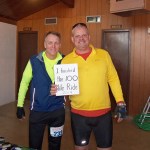 John Schmitz of Albert Lea and Doug Heilman of Sioux Falls, South Dakota, stand with a sign signifying they completed the Bike-A-Thon in 2014. – Provided