Memorial services were at 11 a.m. Saturday at Worthington Christian Church. The Rev. Doug White officiated. A private family burial took place prior to the service in Worthington Memorial Gardens Cemetery. 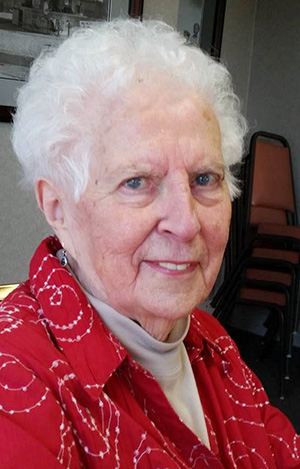 Ruby was born July 14, 1927, to Arthur and Anna Brenne Anderson on her parents’ farm in Heron Lake Township. She grew up in Lakefield and attended public school, where she graduated in 1945. She worked as a soda jerk at Payne’s Pharmacy in Lakefield during high school and then moved to Worthington, where she worked at State Bank until her marriage. She married Kenny Toussaint on March 19, 1948, at Bethlehem Lutheran Church in Lakefield.

The couple farmed in Worthington and Dewald Township for 35 years. Ruby retired in 1981 after working in the Nobles County Assessor’s office for more than 20 years. Ruby was a member of Worthington Christian Church and past treasurer of the Bible school for many years. She volunteered at Crippled Children’s School, The Achievement Center and Worthington Hospital Auxiliary.

Ruby’s favorite pastimes included jigsaw and word search puzzles as well as exercising on the NuStep bike. She was an avid sports fan of the Minnesota Twins, Vikings and Gophers. Ruby resided at Ecumen Meadows in Worthington and most recently at Madonna Meadows in Rochester.

Benson Funeral Home in Worthington was in charge of the arrangements.