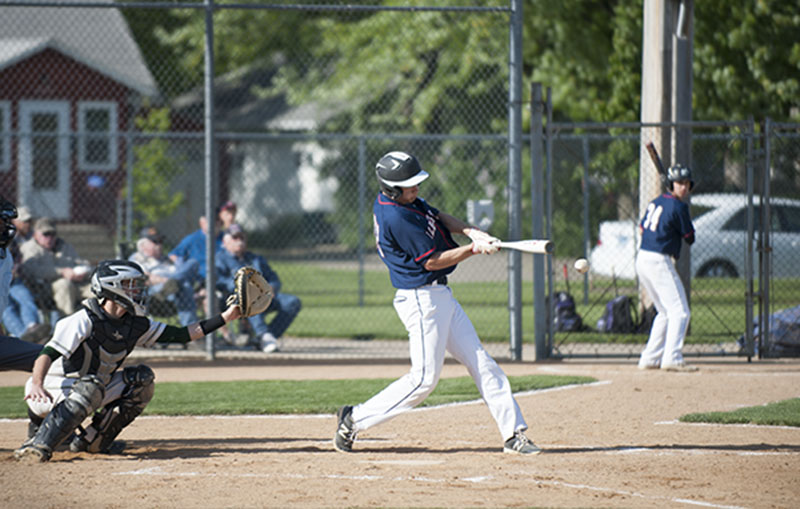 The Albert Lea Tigers had a rough first inning on Tuesday against Winona. It wound up leading to a 3-2 loss.

On Thursday, it was the same kind of start for the Tigers against Rochester Mayo. The Spartans got two runs off Tigers starting pitcher Blake Simon, and the Tigers found themselves playing catch up.

However, the Tigers showed resiliency as they battled back to take the lead from the Spartans. The Spartans tied the game in the fifth inning, but the Tigers got two runs in the bottom of the inning. The Spartans then tied it in the seventh inning. In the ninth, Tanner Bellrichard led off with a single and came around to score from first base on a bunt that ended the game, giving the Tigers a 6-5 victory.

“It was a great win for us,” said Tigers coach Joe Sczublewski. “We made a lot of great defensive plays and were able to win the game on a wild last play.”

Simon worked quickly and efficiently by recording two outs on three pitches in the first inning. After that, Simon ran into some trouble. He walked the next two batters, then allowed an RBI single to Michael Stubbs. A hit batter reloaded the bases and another walk gave the Spartans their second run.

In the bottom of the inning, the Tigers scored their run on a passed ball.

The Tigers would add two more runs in the second inning after Simon set the Spartans down in order.

Stubbs quickly recorded the first two outs of the inning, but Tanner Bellrichard drew a walk to extend the inning. Back-to-back RBI doubles by Mason Hammer and Jake Thompson gave the Tigers a 3-2 lead.

Simon got some defensive help in the top of the third when Ben Witham laid out to make a diving catch in center field.

Another big play in the game came in the fourth inning. The Spartans tried a squeeze play, but the Tigers sniffed it out. The throw was made to Hammer at first, but he pulled his foot off the bag as he saw the runner from third base breaking for home. He fired a strike to Sam Moyer, who did a great job of blocking the plate. When the dust settled, the home plate umpire called the Spartan out, saving a run.

The Spartans tied the game in the fifth inning as Jared Campbell led off with a double, then advanced to third base on balk by Simon. He would score on a fielder’s choice to make it 3-3. 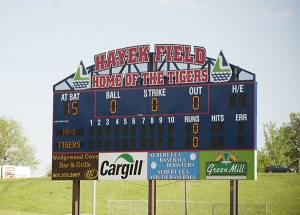 The brand-new scoreboard was used for the first time at Hayek Field Thursday as the Albert Lea Tigers hosted the Rochester Mayo Spartans. Albert Lea won the game in nine innings, 6-5.

The Tigers quickly responded in the bottom of the inning as the Spartans brought on Jaret Stellmaker to relieve Stubbs.

After a groundout, Witham rifled a single, then stole second base. Alex Bledsoe drew a walk. Sam Moyer proceeded to smash a single to center to score Witham. Bledsoe advanced to third on the play, and scored on a Jake Kilby sacrifice fly.

The Spartans tied the game in the seventh, and had a chance to win the game in the eighth inning. But Witham came through in center field again as he made another highlight-reel catch with the bases loaded. After making the catch, he quickly sprung to his feet and fired the ball back into the infield, keeping the runners at their respective bases.

Bellrichard led off the bottom of the ninth inning with a sharp single. Hammer sacrificed himself in the next at-bat. He laid down a perfect bunt down the third base line. The third baseman scooped up the ball and just barely threw out Hammer. However, no one was covering third base.

“(Tanner) never broke his stride,” Sczublewski said. “He kept going. The shortstop and leftfielder attempted to cover third base, but the throw from first base was just off line. That allowed (Tanner) to score the game-winning run.”

Jacob Bordewick came on in relief of Simon in the eighth inning, and pitched two scoreless innings to pick up the win.

The Tigers have won seven of their last nine games.