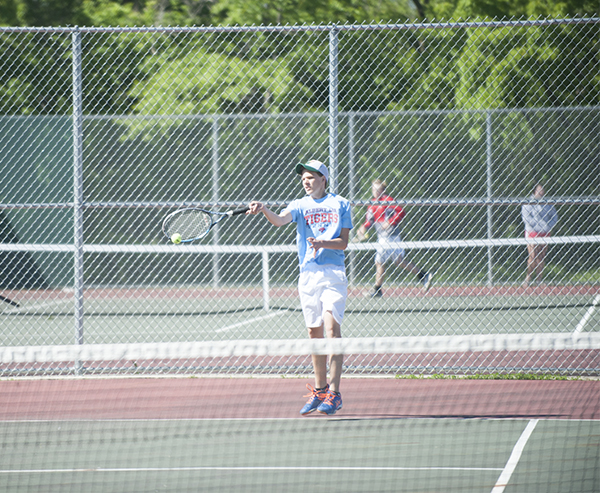 Grant Herfindahl was locked in a battle with his opponent Tuesday. Like all the Tigers, Herfindahl was able to win his match 6-2, 6-0. Jarrod Peterson/Albert Lea Tribune

The Albert Lea boys’ tennis team took its first step in the section playoffs when it hosted Winona Tuesday afternoon.

The Tigers got a tough test from the Winhawks, but ended up sweeping them 7-0 to advance to the next round.

“This was the second time we faced Winona this season,” said Tigers coach Tom Dyrdal. “We beat (Winona) just a few weeks ago, 4-3, but it was a lot different this time around.”

Schafer Overgaard defeated his opponent 6-2, 7-5, and Grant Herfindahl won 6-2, 6-0 to close out the singles portion of the match.

“(Taylor) Herfindahl played his best match of the season in defeating a player who had beaten him earlier in the season,” Dyrdal said. “(Foster) Otten and (Grant) Herfindahl had control of their singles matches from the start. Overgaard won the first set easily but fell behind 0-4 in the second set. He was able to regain the momentum and came back to win the second set 7-5 to take the match.”

In doubles action, Austin Dulitz and Nikk Christianson coasted in their matchup 6-4, 6-1. Sam Ehrhardt and Calen Hoelscher kept the momentum going by crushing their opponents 6-1, 6-0. Andrew Huerta-Ortiz and Keith Grzybowski closed out the match with a 6-3, 6-0 win.

“Our doubles have been strong all season and kept it going today,” Dyrdal said. “(Nikk) Christianson and (Austin) Dulitz were very impressive in their match, controlling the net and setting each other up for volley winners.”

With the clean sweep, Dyrdal was impressed with the way his team came ready to play. 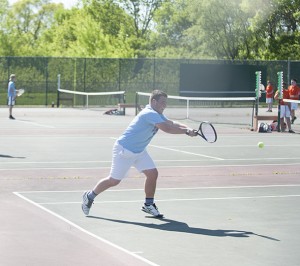 Albert Lea’s Schafer Overgaard returns a serve made by his opponent during his match Tuesday. Overgaard won his match 6-2, 7-5 to help the Tigers advance to the second round of the section tournament.

“This was definitely our best match of the season,” Dyrdal said. “We have had other matches where a lot of our guys were playing their best tennis, but our whole team was playing at a high level Tuesday. The guys were fired up and ready to play today. It was great to see everyone playing well when it counted the most.”