Tigers win on a walk-off hit 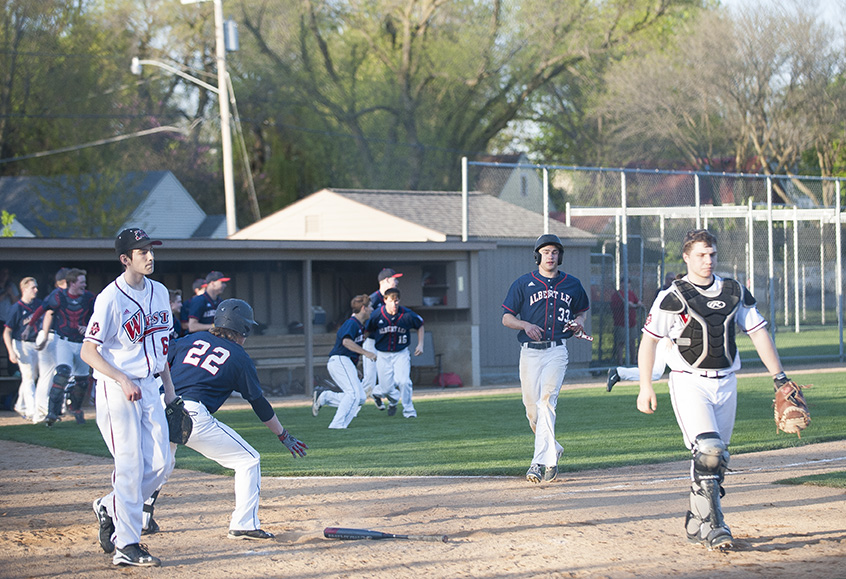 The Tigers’ Parker Mullenbach (22) excitedly waits to greet teammate Mason Hammer (33) as he scores the game-winning run in the bottom of the seventh Thursday at Hayek Field. – Jarrod Peterson/Albert Lea Tribune

The Albert Lea baseball team has found its stride, and continued to take big steps forward Thursday evening when No. 1 Mankato West came to town, and got a walk-off hit from Jake Thompson in the bottom of the seventh inning to win 9-8.

The Tigers struck early and often, but the Scarlets showed their mettle many times throughout the game.

Down 8-7 heading into the top of the seventh inning, the Scarlets rallied to tie the game, and had the bases loaded against Tigers’ pitcher Jacob Bordewick. But Bordewick was able to get Kyle Looft to ground out to first base to end the threat.

Thompson stepped up to the plate. After seeing a few pitches, Thompson got one he could handle, and sent a drive to deep centerfield. It hit the bottom of the fencing, and Hammer, who was off-and-running at the crack of the bat, scored easily from first to win the game for the Tigers.

Albert Lea’s starting pitcher, Taylor Heavner, gave up one run in the first inning, but his teammates helped him out in their half of the inning. The Tigers sent eight men to the plate and scored four runs off Scarlets’ pitcher Michael Middelkamp, who was very erratic in his 1 1/3 innings Thursday.

Hammer was a menace in the first, accounting for a single, a stolen base, and run. He and Ben Witham came around to score on Jake Kilby’s bloop two-run single. Later in the inning, Taylor Bellrichard drove in Witham and Zach Edwards on a two-run double.

The Tigers would add one run each in the second, third, fourth, and fifth inning, and even had a 7-2 lead before the Scarlets countered for three runs off Heavner in the top of the fifth inning.

“You can never have enough runs,” said Albert Lea Joe Sczublewski. “We were able to chip away each inning, and our hitters were able to stay far enough ahead. But (Mankato West) is a great hitting team, and we knew they were going to make it a game.”

And the Scarlets sure did.

They added a run in the third, then struck for three runs in the fifth inning.

After the Tigers got a run back in their bottom half of the inning, the Scarlets kept their bats hot into the sixth.

The Scarlets got doubles from Brandon Marsh and Looft, with Looft’s bringing in Marsh. Then, Looft scored on an RBI groundout. Bordewick got Hunter Frericks to strike out to end the inning.

But the Scarlets had the momentum, and Hoppe mowed down the Tigers in order.

The Scarlets were back at it in the seventh. After a popout, Ben Heichel smashed a double, and advanced to third on a wild pitch. Robert Meidl knocked Heichel home with an RBI single, and the No. 1 Scarlets had finally tied it.

Bordewick got himself into more trouble, though. He loaded the bases, before getting Looft to hit a grounder to first base.

In turn, that paved the way for Thompson to drive in the game-winning run.

“Our pitchers pitched their hearts out,” Sczublewski said. “Our defense played so well behind them, too. That’s been our one constant this season, our defense. Our defense has been very strong and consistent. Today, we put it all together to earn the victory.”

Hammer was an offensive force in the game. He went 2-4 with three runs scored, a stolen base, and hit-by-pitch.

Albert Lea is in action today at Byron.

First pitch is scheduled for 5 p.m. at Byron Middle School.