Twin Cities man charged in high-speed chase on I-35

A Minneapolis man is facing prison time after reportedly leading a Minnesota State Patrol trooper on a chase at speeds of more than 120 mph Saturday in Freeborn County.

Travion Damond Simms, 19, was charged Monday in Freeborn County District Court with fleeing a peace officer in a motor vehicle. 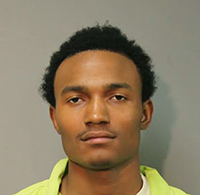 Court documents state the trooper activated his emergency lights. Speeds reportedly soon exceeded 100 mph. The chase reportedly continued nearly two miles north on I-35, where the vehicle reportedly passed several vehicles on the shoulder, then weaved into the left lane.

The trooper reportedly watched the vehicle weave sharply onto the shoulder at speeds in excess of 100 mph.

Court documents state the trooper was traveling 124 mph, and the vehicle was still pulling away. The chase reportedly continued north of Ellendale, when the Altima went into the median and into the southbound I-35 lanes, before crossing the median and returning to the northbound lanes, as troopers attempted to cut it off.

Simms was reportedly later identified. He reportedly said he had fled because he knew his license had been suspended and he had no insurance for the vehicle. He had reportedly been trying to get as close as possible to the Twin Cities.