Walter Dale Hall was born Nov. 17, 1940, to James and Ella (Pitzner) Hall in Albert Lea. He grew up in Albert Lea and was a resident of the area his entire life. Walter began work at an early age, doing anything he could to help provide for his family. On March 6, 1960, he was united in marriage to Patricia (Simonson) at First Lutheran Church in Albert Lea. The couple was blessed with three sons.

Walter worked as an over the road trucker. His last job he was contracted through  was Pro Trucking, and he worked there until his retirement at the age of 62. Following his retirement, you could find Walter having morning coffee with his buddies, going on road trips with his friends to look at old cars and tractors, or find him in his garage, gazing at traffic going by his home. He could be described as a hardworking, strong-willed man who always provided for his family. He was strong in stature and appearance, but all you had to do was ask him, and he would say “I’m a really nice guy!” which he was. 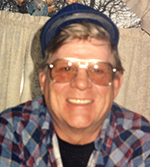