Many knew William “Bill” Lloyd Kepple as an implement dealer, a tennis player, a fisherman or as a builder at Albert Lea Community Theatre. Often seen driving his white pickup, Bill was one of the good guys, and he passed away Wednesday, March 23, 2016.

Born in Tolstoy, South Dakota, on March 20, 1920, Bill grew up with brothers Paul and John, but when his father’s Farmers State Bank was sold in 1925, the family moved to Aberdeen, South Dakota, and then to Minneapolis in 1929. There, Bill’s father worked as an assistant branch manager for Oliver farm equipment. His father, Lloyd G. Kepple, was well aware of the promise of mechanical power — and coupled with rapidly growing farm densities in Freeborn County — the family moved to Albert Lea in November 1934, when Bill was in ninth grade.

A keen fisherman and natural athlete in his youth, Bill became an Eagle Scout, later finding time for a new passion in high school — flying airplanes. His first solo flight was quite an experience — on his return flight from Rochester, he encountered a snowstorm. He used his common sense and followed the railroad tracks back to Albert Lea, landing safely — much to the relief of his instructor. 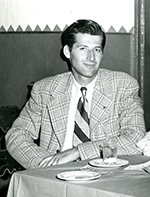 Bill also enjoyed the arts. In 1938, Bill starred in his Albert Lea High School senior play as Merton in “Merton of the Movies.” Years later he became the fiddler in ACT’s “Fiddler on the Roof,” moving from his supporting role as a set builder to playing a cameo role with a top hat and fiddle.

Bill graduated from the University of Minnesota in 1942 as an aeronautical engineer. During the war, Bill began working in Cleveland for the newly-formed National Advisory Committee for Aeronautics at the NACA Aircraft Engine Research Lab. Now known as Flight Propulsion Research Laboratory of NASA, Bill was one of the ready group of wartime engineers focused on wind tunnel technology, icing on aircraft and test-piloting new aircraft. Even in the early 40’s, NACA embraced the potential of a future peacetime program and Bill told his wife Margie, “They say we’re going to the moon!”

Bill married Marjorie at St. Francis Chapel at Mission Inn in Riverside, California, on July 20, 1946, while he worked for an engineering firm in California. In 1947, father Lloyd implored Bill to return to join Lloyd and brother, Paul, in the farm implement business, telling Margie they’d stay in Albert Lea “just for one year.” But Bill valued his family business, hard work, and farmers and their families. He stayed put, eventually launching Kepple Machinery Co. in Albert Lea, later moving to Hayward as the White Equipment dealer.  This business, with its generous boss at the helm, was honored in 2001 as Regional Employer of the Year.

At age 50, late to the sport of tennis, Bill began playing the game. He often played with tennis pals Bill Buege and Gary Koeder.  Bill and Marge eventually wintered in Green Valley, Arizona, where Bill played several times daily. At age 81, Bill was a Gold Medal winner in the Green Valley senior games.

Back in Albert Lea, Bill, Buege and Koeder volunteered to help the high school girls’ tennis team “hit the ball harder.” Bill’s commitment to the team and sport led to his being honored as a Community Asset Builder one year. He valued helping the girls improve their skills and also valued the exercise he got in return.

Bill’s second passion was fishing — rarely did a year go by when he wasn’t with Canadian friends, including Gillis and Hank from Red Rock, Ontario. They were flown in to toss a line for arctic char alongside First Nation guides on the pristine rivers that feed into Hudson Bay near Churchill, the polar bear capital of Canada. He fished alongside these Canadian friends at rapids and rocks at the Rankin Inlet along the shores of Hudson Bay. In their later years, this gang took things easier to fish the BC inlets by trawler or by barge along Superior’s north shore. His daughter, Carol, remembers her father regularly tied his own fly fishing lures, and if she went fishing with him, he was focused. “No talking, no reading,” she recalls. “He wanted me to learn to pay attention.”

Bill thrived in the midst of competitive tennis, great friends, post ACT theatre parties and promise. A 2005 Albert Lea Tribune article stated that for Bill, who spent his winters in Arizona and who “has made friends all over the nation, it is the little things he is able to do in his hometown he is most proud of.” Bill himself stated, “I enjoy what I have done and I wouldn’t change any of it.”

In his 90s, when his mobility and eyesight challenged him, he remained a man of his house, shared morning coffee with buddies and devoted the rest of his time as caregiver to Margie. He preferred his “stick from an island in Canada” to a regular cane. To the end of his life, Bill laughed with his tennis friends and shared teasing words with his neighbors.

His daughter, Carol, and his two granddaughters, Natalee and Madeline, survive Bill.

A memorial service for Bill will be at 2 p.m. June 5 at Christ Episcopal Church in Albert Lea. Visitation will be at 1 p.m., with a celebration of Bill’s life to follow at 2 p.m. Memorials are preferred directly to the Freeborn County Humane Society, P.O. Box 423, Albert Lea, MN 56007.