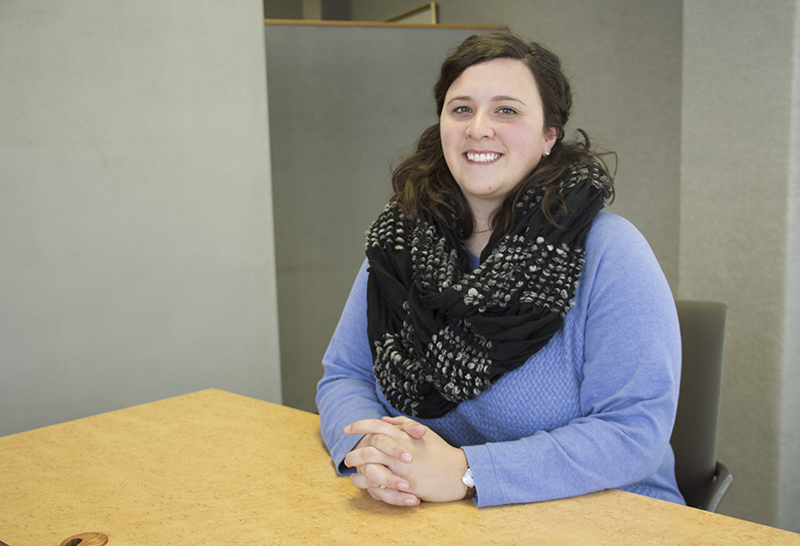 LAKE MILLS — Long-standing family ties and a sense of community led one Lake Mills graduate to pursue a career in her hometown.

Cassie Johnson, 24, started as the executive director of the Lake Mills Chamber Development Corp. in August.

Johnson graduated from the Lake Mills school district in 2009 and attended North Iowa Area Community College and Iowa State University, graduating in 2013 and earning two majors — one in business marketing and another in business management.

After graduation, she started working in marketing at Waldorf College in January 2014 and did general marketing for the college, media coordination, graphic design, event planning and also helped with the college’s website.

“When I was working in Forest City, I always had in the back of my mind that I wanted to get back into Lake Mills somehow,” Johnson said. “Around the same time, I wanted to get more involved in the community and then saw this job opening. The timing was right.”

She said she likes the sense of community in Lake Mills.

In August, she accepted the job as the executive director of the Lake Mills Chamber Development Corp. She runs the organization with a board of directors.

She attends city council meetings, meets with perspective business owners and researches available land and buildings. She also helps plan community events, such as July Jubilee and a holiday festival. She maintains the website for all of Lake Mills, posting information about the city and the chamber. The organization is funded by the city, but acts separately.

The chamber is a community resource for many, providing information and selling movie theater gift certificates and Lake Mills Chamber Bucks.

Johnson said in 2015, the chamber had 86 members. She hopes to grow that number this year.

Looking to the future, she also said she would like to see some changes in the chamber structure and the services it provides because of the changes taking place in the business world.

“We need to update what we’re doing, make way for younger entrepreneurs who are doing business differently,” she said.

This will need to be done by working closely with businesses and the chamber’s board of directors, she said.

She also hopes the chamber website can be a source of information for current and prospective businesses.

She said she has enjoyed her time in her new position thus far, and she looks forward to expanding her skills and learning more about economic development. She appreciates how supportive the city’s residents are of its businesses.

Johnson, the daughter of Eric and Kathy Christianson, married her husband, Michael, in August. Michael Johnson is also from Lake Mills and is a farmer.

The chamber is open from 8:30 a.m. to 4 p.m. Mondays through Fridays or by appointment.

Why does she choose to live and work in Lake Mills?

86 – Members of the Lake Mills Chamber Development Corp. in 2015