Across the Pastor’s Desk: Finding refuge in word of God

Across the Pastor’s Desk by Nancy Overgaard

Nancy Overgaard is a member of the Freeborn County Ministerial Association.

One of the most precious sights and sounds of spring for me this year was right outside the front door. A family of finches made their nest in the loop of a delicate bow tied onto a wreath of dried twigs and grasses. Hearing insistent shrill chirping of tiny birds, I looked out to see four or five outstretched necks with beaks wide open being fed by their mother. The moment they detected my movement, the mother flew off and the baby birds hunkered down one atop the other. Even from inches away I could not see them; they blended in to the bottom of the nest. 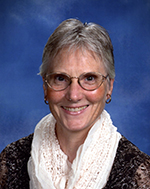 Protected by a scant porch roof, one would hardly have thought theirs to be a safe refuge. Yet, even on a night when the wind blew strong enough to topple a semi a few miles away, their nest was undisturbed. During torrential rain, they remained safe and secure, untouched by a single raindrop. Nor did a single predator discover their hiding place, though eagles, hawks and even fox scour the yard for prey.

Psalm 34 speaks of God as a refuge.

“Taste and see that the Lord is good!” he invites us. “Blessed is the one who takes refuge in Him.”

One might wonder how the unseen God can provide a refuge for us in this world. Yet, the Psalmist speaks of finding God to be a refuge in all kinds of troubling life situations, including danger, want and grief. He invites us to do the same.

An introductory heading tells us Psalm 34 was written by David, a well-known figure in the Old Testament whose life was often in danger quite literally. In those times, he sought refuge in God and God protected him, even when his assailants were only inches away. At 12 years old, I prayed my own first personal prayer at a time when I felt my own life was in danger. My own would-be assailant stood searching for me only a few feet away, yet he never detected my hiding place.

The Psalmist encourages us to also turn to God in times of want and need.

“Even strong young lions sometimes go hungry,” he wrote. “But those who trust in the Lord will lack no good thing,” (Psalm 34:10, New Living Translation).

Peter Craigie (1983) points out that, “Of all the beasts, the lion is most powerful and least likely to lack prey and go hungry. And among the lions, though old lions may lack prey, young lions are active and successful as hunters.”

By implication, even those most able to provide for themselves will encounter life situations in which they are in need of divine help. Those who turn to the Lord will not be disappointed.

Later in Psalm 34, the Psalmist speaks of God as a refuge in times of grief and sorrow.

“The Lord is close to the brokenhearted and saves those who are crushed in spirit,” (Psalm 34:18).

While serving as a pastor in upstate New York, I and other pastors were called to a high school to be available to students after a classmate was killed in a tragic accident. Administrators anticipated students would need a refuge — a safe place to talk about their grief and shock. God can provide for us that place of refuge.

Whatever our troubles, the Psalmist indicates, we can turn to God in prayer and find refuge (Psalm 34:17, 19). For those who have never done so, it may feel unnatural. Yet, consider a lesson from the little birds. A week after they made their presence known, they were ready to leave the nest. One by one they flew off — the last little bird perched on the edge of the nest as though afraid to try his wings. Hoping for one last photo, I opened the screen door as quietly as I could, but not quietly enough. Startled, the fledgling bird instinctively and instantly flew to the highest tree as though he had been practicing all week.

Praying and seeking refuge in God may seem unnatural if you have never tried it before. Yet, just as those little birds instinctively knew how to fly, you may find it comes naturally, even on the first try.