Albert Lea man has played accordion for more than 70 years 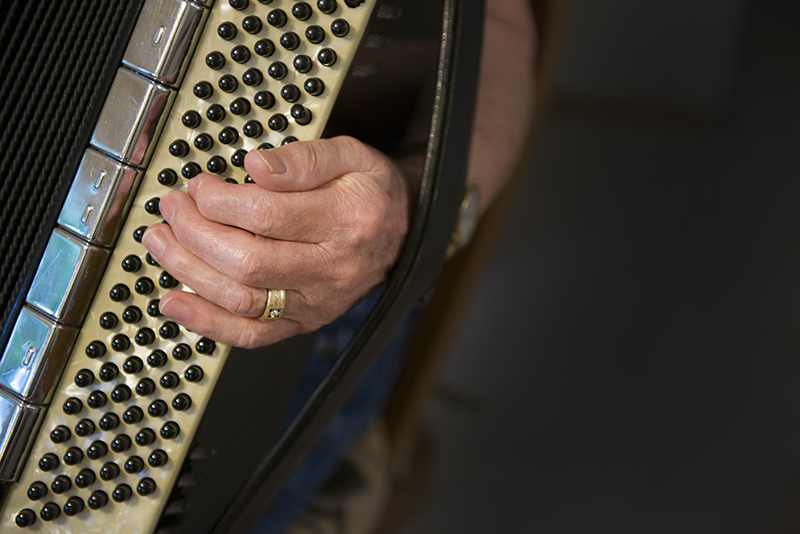 Millard Hamborg has decided to retire from playing the accordion after more than seven decades with the instrument at his side. - Colleen Harrison/Albert Lea Tribune

What started as a childhood hobby became a lifelong passion for one Albert Lea resident.

Millard Hamborg started playing the accordion when he was around 14 years old. At 16 he started playing with a group of school friends, which gradually turned into playing parties and other events.

Now 88, Hamborg vividly recalls playing numerous going-away parties for soldiers leaving to fight in World War II. Hamborg himself was too young to be eligible for the military at that time, and a few years later — when the Korean War was going on — he wasn’t able to pass his physical exam for the military because of vision issues. 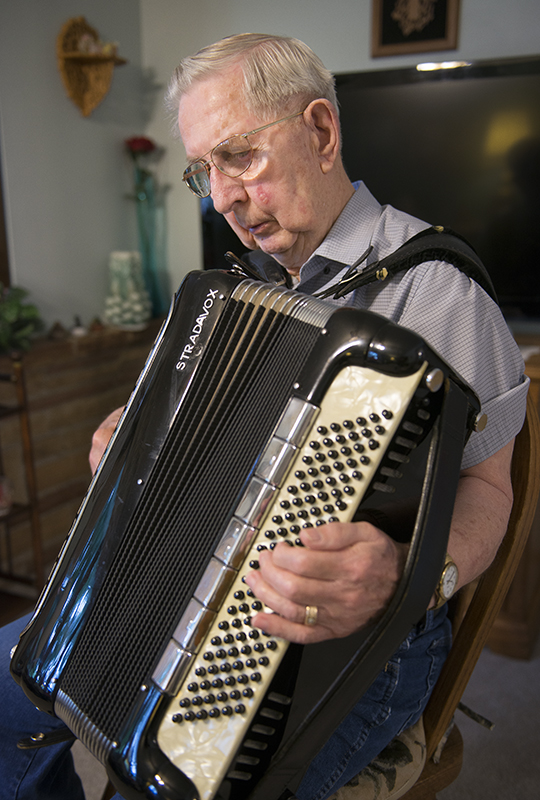 Hamborg first picked up the accordion as a teenager. He played his last public event with the instrument in mid-June at the age of 88. – Colleen Harrison/Albert Lea Tribune

Instead, Hamborg became a carpenter, and eventually worked for Streater making cabinets. After he retired from the company in 1991, he was still an avid woodworker, making a number of pieces that can be found throughout the Albert Lea home he shares with Phyllis Hamborg, his wife of almost 64 years. The Hamborgs were both also active volunteers in area organizations — such as RSVP, ride services and First Lutheran Church volunteer efforts.

Hamborg continued to play the accordion throughout his adult life, playing for parties and other events at nursing homes and senior centers, among others. He was frequently accompanied by his friend Ken Bertelson, as well as others over the years. Hamborg’s son, Roland Hamborg, has also accompanied him before, usually on guitar. One of Hamborg’s daughters, Joan Vanderploeg, is musically inclined, as well.

Hamborg said he often played with Norwegian bands, or was playing similar styles of music — polkas and other Scandinavian and German-influenced music from the 1930s and ’40s. While more classic eras of music influence a lot of what he has played, Hamborg said he enjoys learning all new types of songs — all of which he has learned to play by ear. His favorite song to play is “Faded Love,” and Daniel O’Donnell is a musician whose work Hamborg has frequently tried to learn over the years.

When thinking of all the decades of memories gathered by playing music for other people, tears come to Hamborg’s eyes. He remembered a woman coming up to him and telling him about the memories he brought back for her with his music.

“That’s all we tried to do, was bring back memories,” he said.

Hamborg laughed as he recalled another memory from a time playing music in Austin. A woman slipped and fell while he was playing, and when Hamborg stopped playing to make sure she was OK, the woman — still laying on the ground — told him, “Keep playing, keep playing.”

As much as he loves playing the accordion — especially playing it for other people — Hamborg has decided it’s time to retire from playing the instrument publicly. As he has gotten older, he said transporting the instrument around and holding it for longer periods of time has started to take a toll. To commemorate his last time playing for others, Hamborg played a party at St. John’s Lutheran Community in mid-June. His other daughter, Daphne Hamborg, said the event was a bittersweet one for her father and their family.

“We’re Albert Lea — born and raised,” she said. “It just seemed so sweet.”

While his family will disagree with him about his level of talent, Hamborg has stayed humble about his abilities — even after all these years.

“I don’t consider myself to be a good musician, we just played music I liked,” he said. “It’s hard to give it up.”

Fun fact: Hamborg did a lot of woodworking when he first retired in the early ’90s.