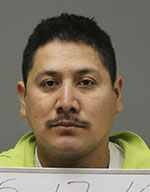 Jorge Sanchez-Ramirez, 35, was sentenced after pleading guilty to patronizing prostitution, a misdemeanor.

Sanchez-Ramirez was sentenced to 35 days in jail and given credit for 35 days served.

Sanchez-Ramirez and four other men were arrested after reportedly responding to advertisements placed online by police, making the agreement and making payment.

Others arrested in the sting were the following:

Hellman, Bass, Embrock and Thakella each face one count of patronizing prostitution in a public place and are scheduled to make their first appearances in Freeborn County District Court June 30.

Officers responded to advertisements placed by Scroggins and Finley. The women reportedly came to Albert Lea and were arrested.

Scroggins and Finley have not been charged in connection with the incident. Possible charges are under review by the Freeborn County Attorney’s Office.