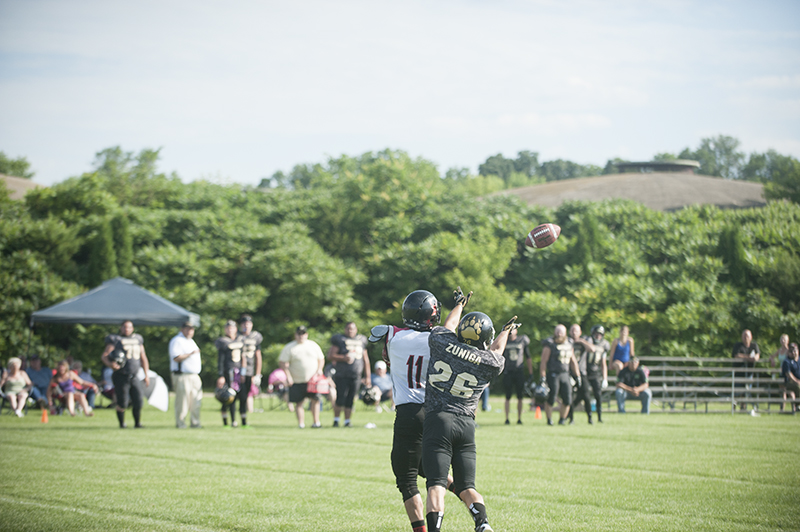 Grizzlies cornerback Colton Zuniga steps in front to break up a pass during the second quarter of Saturday's game against the North Iowa Bucks. Jarrod Peterson/Albert Lea Tribune

It was a hot, but beautiful day on Saturday as the Albert Lea Grizzlies hosted the North Iowa Bucks.

The Grizzlies were coming off two consecutive losses in which their offense struggled, so getting it back on track was the main objective.

However, the Grizzlies were unable to slow down the Bucks on defense.

Bucks tight end David DeLacy stretches out to catch the ball in front of the Grizzlies’ Craig Sykes in the first quarter of the Bucks’ 50-12 victory Saturday evening.

North Iowa running back Patrick Jackson ran for 224 yards and two touchdowns, both coming in the first half, and its defense turned up the heat on quarterback Cameron Batton in the second half.

The Grizzlies defense stood strong in the first half and forced two interceptions, including one that was returned by Steven Salinas for a touchdown.

After a failed two-point conversion, the Grizzlies trailed 8-6.

Jackson would score his second touchdown of the game later in the second quarter.

The Grizzlies would intercept North Iowa quarterback Patrick Falls two more times during the game, but the offense was unable to move the ball.

The loss is the third in a row for the Grizzlies.

Albert Lea will close out its season when it takes on the South Central Dawgs Saturday at Truman High School Field.

Kickoff is scheduled for 6 p.m.