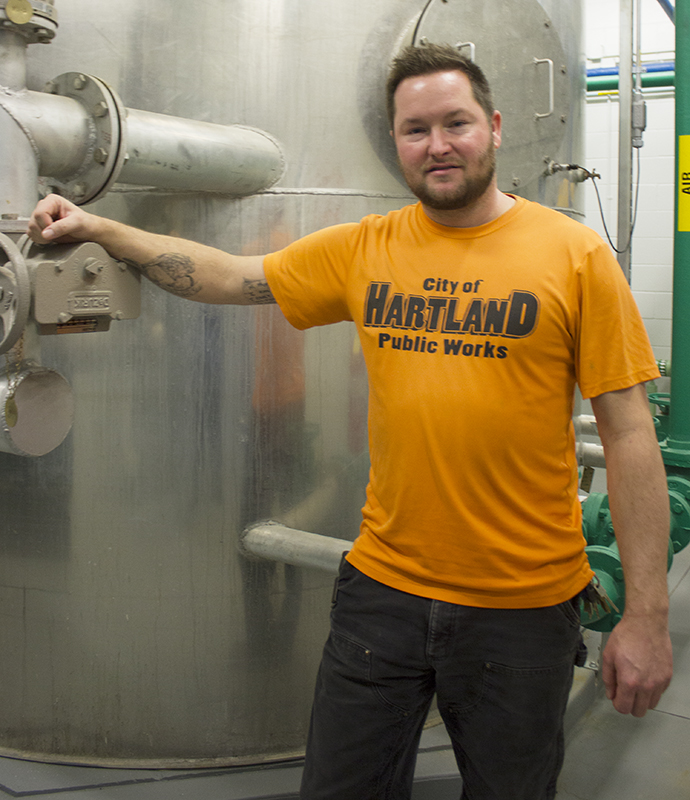 As part of a 40-year joint venture between Hartland and Freeborn, the water treatment facility was built to pump water from Hartland to and from the city of Freeborn.

Hartland Public Works Supervisor Andy Flatness said the venture will begin once Freeborn completes construction on its water mains. He expects the services to combine this summer.

The facility presently is used to ensure safe drinking water for Hartland.

Hartland Mayor Kelly Routh said residents were the No. 1 priority in the joint venture.

“We’re trying to work together and make things more affordable for the residents,” Routh said. “If we tried to go at this alone, we couldn’t afford it.”

The cities share ownership and the costs of the facility’s upkeep.

Routh said the savings from the joint venture allowed Hartland to construct the new water tower.

The welded structure of the water tower is in place. Flatness said he expects the structure to be completed this summer.

Costs for the system — including a new treatment plant, water tower, water main and water meters, plus engineering costs — total about $6 million.

Flatness said the project took six to seven years to complete from the beginning stages of planning.

Routh said the loan and grant were huge, both to the cities and the state.

“It just shows when they can combine two projects into one, it actually saves them quite a bit of money,” Routh said of the state.

He said the joint venture wouldn’t have been possible without the loan, because of the tax burden that would have been placed on the community’s residents.

The connection enabling the joint venture will be completed this year. After ensuring the system runs properly, residents outside the two cities will be able to connect two years after the line is connected, Flatness said.

Why are you doing this for Hartland?

“We’re trying to work together and make things more affordable for the residents. If we tried to go at this alone, we couldn’t afford it.”