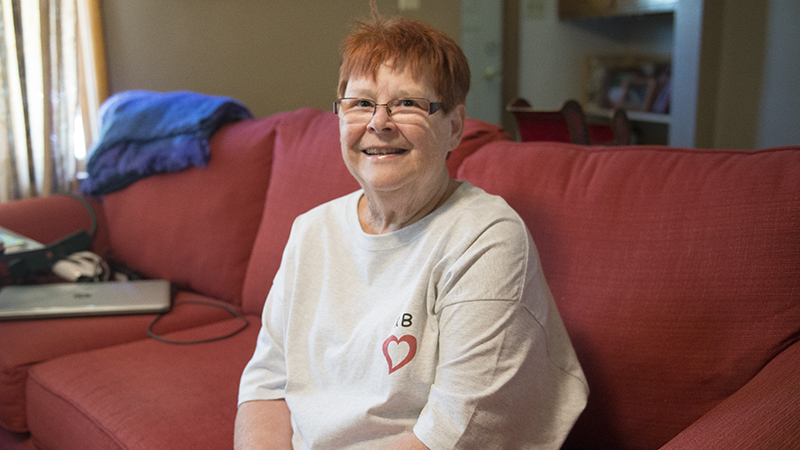 Longtime Albert Lea Community Theatre volunteer and supporter Kathy Brekke is a breast cancer survivor of 17 years who was recently diagnosed with cancer in her lungs and bones. A karaoke event is planned to benefit Brekke. -Colleen Harrison/Albert Lea Tribune

Brekke being a member of that theater family, it’s no surprise they have come together to support her in her fight against cancer.

ACT will host a karaoke benefit for Brekke from 7 to 10 p.m. Saturday at the Marion Ross Performing Arts Center. Tickets are $10 and can be purchased by calling 1-877-730-3144, going online at actonbroadway.com or visiting the box office, which will be open the night of the event. All proceeds will go to Brekke to assist with her medical expenses.

Brekke has been a dedicated contributor to numerous productions at the community theater. Seven years ago, Brekke began her theater career in the play “Leading Ladies,” where she helped two men dress as women. She was immediately in love.

Despite her love for the theater, Brekke never really took to the stage. Her first and last role as an actress was in “Calendar Girls.”

Though she loves the production aspect of theater, she didn’t much enjoy acting herself. Brekke finds plenty of ways to help out at the theater besides acting, though. In her seven-year spell at the theater, she has held positions such as prop designer, makeup artist, lighting technician, stage manager and production manager.

The list of positions Brekke has held is extensive, but it only  just begins to cover the amount of work required to put on a production.

“Productions take a lot of people,” she said.

But this group-effort mentality is a big reason she enjoys them so much. Her favorite production she has helped with, “Happy Days,” had such a mentality.

“Everybody was happy to be there,” she said.

The appearance of Marion Ross herself only added to this family-like attitude. One night before a show, Ross came to the theater to meet everyone. She also gave a speech before the show and went out to Green Mill with the cast and crew afterwards. A hometown hero showing up to a local production is a perfect example of what theater is all about, she said, and it’s another reason why Brekke enjoys it so much.

ACT is more than appreciative about Brekke’s work at the theater.

“Kathy has been a pivotal part of the ACT organization for many years, working diligently behind the scenes for nearly every show,” ACT President Jason Howland said.

Now, when Brekke needs it the most, ACT will try to give her the help she needs in her fight against cancer.

Seventeen years ago, Brekke was diagnosed with breast cancer. After a tough fight, she managed to beat it, only to find cancer in the other breast a year later. Again, she beat the disease.

Recently, though, she was again diagnosed with cancer. This time the cancer spread to her bones and lungs. This time, no chemotherapy or radiation will be attempted. Rather, she was given medicine to help prolong the time she has left. According to doctors, that time is estimated to be two years at most. Brekke is not giving up, though, and neither are her friends at ACT.