A former state representative on Tuesday filed his bid for the 1st Ward Albert Lea City Council seat on what was the last day to file for public office.

Rich Murray, 58, of 124 Ridge Road, will face off against residents George Gillespie and Craig Havener.

Murray, owner of ISC Financial Advisors in downtown Albert Lea, said he has lived in the city for almost 33 years and said he thinks there are many important issues facing it. He said he thinks he could offer some assistance on the council with his financial and small business background. 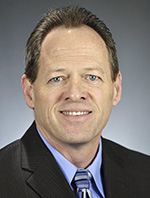 “I’m excited about the things that are facing us, and I think a person needs to be smart and conservative with people’s money,

Murray has volunteered with the Lift One, Lift All group, the Naeve Health Care Foundation board and the Beyond the Yellow Ribbon committee. He also helps with the United Way of Freeborn County.

Looking to the future, Murray said if he is elected he wants to continue to look at ways to develop more jobs in the community that pay a living wage. He also wants to help existing and future businesses grow.

This can be done through educating the workforce and infrastructure improvements in the community.

Murray said he thinks Albert Lea has many of the tools it needs to be successful — between its lakes, education system and other resources.

“More than any time in the last 30-plus years I’ve been here, I feel like more things are coming together,” he said. “I feel like some really great things can happen in the next few years.”

He said he is excited about the future of the city and wants to be a part of developing it.

Murray and his wife, Sandy, have four children and 14 grandchildren.

Look to a story in Thursday’s Tribune about Havener.