Ground at site of former USC school being dug up again 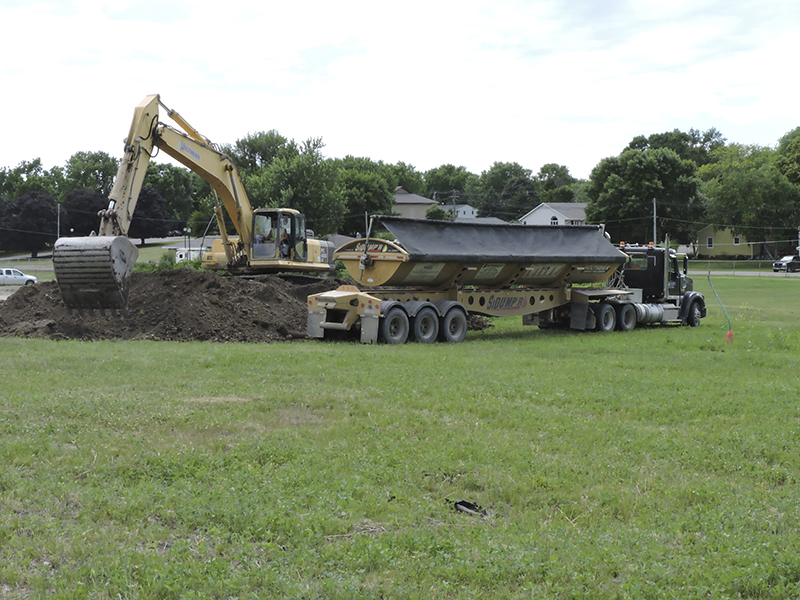 Unacceptable fill from the former site of the United South Central School at 250 Second Ave. SW in Wells is currently being removed. - Kelly Wassenberg/Albert Lea Tribune

WELLS — Ground has been rebroken at the site of the former United South Central School, but nothing new is going up. Instead, some of the fill added to the site after the building was demolished is being removed.

Responding to a call from a concerned citizen last fall, the Minnesota Pollution Control Agency tested soil at the site and found that fill material used contained unauthorized demolition debris.

According to USC Superintendent Jerry Jensen, that fill is now in the process of being removed and replaced with fill approved by the MPCA and the city of Wells.

The time frame, as well as the costs, of the project are unclear.

Jensen said Kevitt Excavating, the contractor hired to raze the old school building, has returned to the site to do the work.

He said it is unknown what the costs of the remediation will be. The company will take out fill until it reaches soil that is acceptable and will then have to bring in more fill to leave the site specifications, which had previously been outlined in an agreement between the school and the city of Wells.

“Now, how much fill gets removed and new fill replacing, it could be determined by either one of those bodies,” Jensen said of the city of Wells and the MPCA.

Who will be responsible for those costs is something that also needs to be determined. Jensen said Kevitt has put the school on notice that it will likely submit a claim or change order for some of the additional costs of the remediation work. Therein lies a potential problem.

“The district has been taking the position all along that materials that should not have been crushed were crushed, found their way into the fill, so that should not be the district’s responsibility to remedy in any way,” Jensen said.

Despite these uncertainties, Jensen is confident the site will soon be up to MPCA standards, which would allow the property to be resold and repurposed.