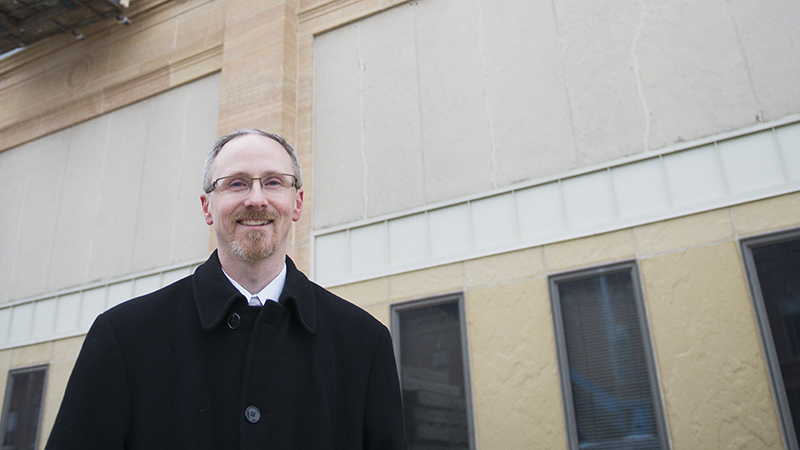 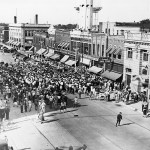 In August 1939 a large crowd gathered to see Robert Wadlow, “The World’s Tallest Man,” at Plymouth Shoes on Broadway in Albert Lea. The Tribune indicated Wadlow was 8 feet, 9 1/2 inches tall. Near the street light in front of Plymouth Shoes — sponsor of the event — is a raised platform where Wadlow is sitting on a chair. – Photo courtesy Freeborn County Historical Society 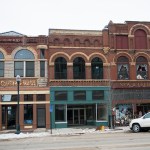 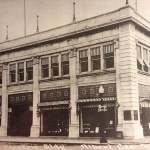 The building at the corner of Broadway and Clark Street was built in 1923 for the local electric company. Note the light poles along the roofline, which were eventually removed. Also note the transoms and awnings that helped cool and shade the building. The building housed Alliant Energy for many years and is now being renovated by Arends Properties. – Photo courtesy Freeborn County Historical Society 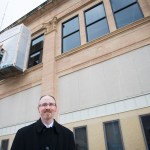 The commission oversees the city’s historic downtown — the largest intact historic district in Minnesota. Even when compared to bigger cities, Albert Lea has the most properties — 114 —contributing architectural or other features to a historic period within a specific area.

Buildings counted as contributing to the historic district are those built more than 50 years ago with no major architectural changes, though the core historic period is 1874 to 1928. The district covers portions of Broadway, Clark Street, William Street, Washington Avenue and Newton Avenue.

The Minnesota Historical Society and National Park Service consider downtown Albert Lea to be an excellent example of a historic commercial district that has been preserved for future generations to experience. The district is listed on the National Register of Historic places for its local significance in commerce and architecture.

The city first established the district, comprised solely of Broadway Avenue, in 1987, and expanded it in 2004 to include most of downtown.

Also in 2004, the city formed the Heritage Preservation Commission to:

Identify the significant structures and details required to preserve the quality of the district.

Provide guidance to local property owners on the historical significance of their properties.

Establish design guidelines for restoration, renovation or rehabilitation of properties within the district.

The commission reviews proposed changes for downtown exteriors and determines if they meet the guidelines. If so, the commission issues a Certificate of Appropriateness prior to the city issuing a building permit. Properties within the district are eligible for tax credits and city grants to fix up the building fronts. Studies have shown a historic district can lead to increased commerce, tourism and property values, according to the Preservation Alliance of Minnesota and Minnesota Historic Preservation Office.

Kirchner sees the commission’s job as helping downtown tenants and owners do more to restore their building exteriors by finding more grant money from the state.

On a cold and blustery day in late January, Kirchner walked down Broadway Avenue and proudly pointed out buildings renovated and features preserved. Brick Furniture still has its original posts made of metal in its front facade. The original awning cranks remain on The Marketing Plant building. The Edward Jones building used gooseneck lamps and a sign painted on its front window as part of its effort to keep downtown’s quaint look. The Interchange and others installed full-height doors and revealed or replaced front windows above the doors.

The big project that day was installation of windows in the former Alliant Energy building on the corner of Broadway and Clark Street. This building, constructed of limestone in 1923, was a Midwestern showpiece in its day. Arends Properties is now restoring many of its stately features while renovating for a modern office.

The historic buildings originally had large front windows to supplement dim gas lighting with sunlight. The awnings and transoms above provided shade and ventilation before air conditioning was invented.

Many historic characteristics remain downtown, but they’re covered with siding, boards and other modern changes over the decades. These features — like many of the community’s features — are just waiting to be uncovered.

“The size of the town doesn’t matter,” Kirchner said. “It’s the passion.”

He was born and raised in Albert Lea, attended college at St. Cloud and Mankato State universities, and earned a bachelor’s degree in English. Kirchner also worked in retail, and his customer service skills eventually led him to banking. He is now branch manager of U.S. Bank in Albert Lea.

“I never wanted to leave,” he said of why he returned to his hometown. “I like that I can walk down the street and know people around me. It’s home.”

He and his wife, Jody, have two children, Landon and Kaedyn, in grades 11 and eight respectively, at Albert Lea High School.

Kirchner serves on many nonprofit boards and is president of the Freeborn County Historical Society this year — a great fit with the heritage commission. The latter is a connecting factor among the museum, Chamber of Commerce, Convention and Visitors Bureau, city of Albert Lea and others working to promote the community.

1874 – Beginning of the historic period for downtown Albert Lea

114 – Properties in the historic district

13 – Businesses with exterior work since fall 2013