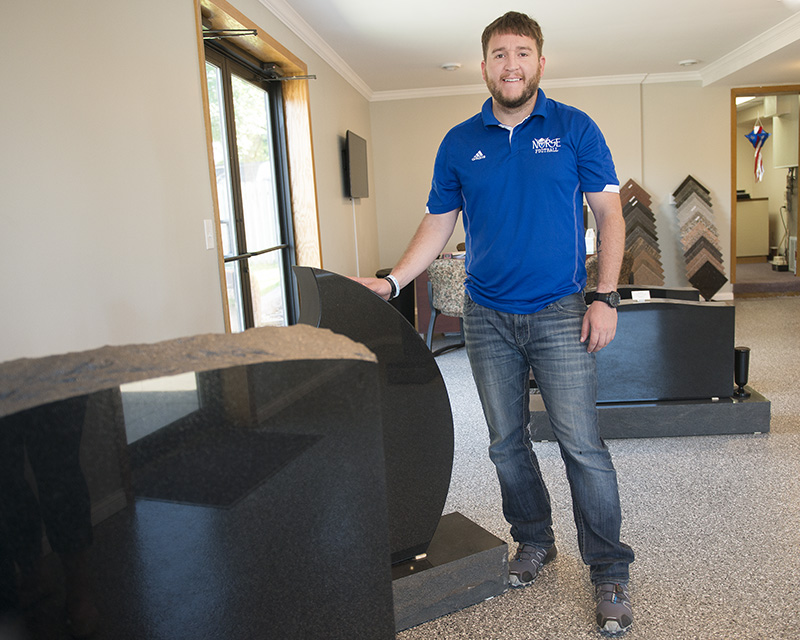 Blane Maher is the executive director of Albert Lea Monument. His parents Mark and Lori Maher own the business. Colleen Harrison/Albert Lea Tribune

In June 2015 Blane Maher had an interesting challenge when he opened a new business on the city’s north side. In reality, this supposedly new business with the name of Albert Lea Monument has a local legacy that goes back for 139 years.

The history of this business involves three generations of two unrelated families. As a result of some research from the library at the Freeborn County Historical Museum, plus other sources, Maher can now provide the following information:

“In  1877 our founder M. (Maurice) Bessinger, opened Albert Lea Marble and Granite Works. Shortly after, he opened Blue Earth City Marble and Granite. Over time, he passed the company down to his sons Frank and William. Frank ran the Albert Lea location while William ran the Blue Earth location. Frank and William both retired in 1939. Frank closed the Albert Lea location and William passed Blue Earth Monument to his son, Everett. It was Everett who trained my grandfather Harlan Schmitgen in the monument trade. My parents now own and run Blue Earth Monument. After serving four years in the military and returning from war, my parents asked me to join the family business. In June of 2015 we reopened a location in Albert Lea, naming it Albert Lea Monument,” (Note: Blue Earth City is the original name of the Faribault County community.)

“Things are going well here in Albert Lea,” Maher said. “It’s now a challenge to get our name out and let folks know what we have to offer.”

In a previous Tribune article, he commented about this community, saying he loved the history of the city, the lakes and the people.

Maher has lived in Northwood since July 2015 and enjoys life in this “quiet and friendly community.”

Albert Lea Monument, on the city’s north side, specializes in gravestones and monuments to be used as permanent mementoes for the deceased.

He said the granite and stones originate at quarries near St. Cloud; Wausau, Wisconsin; and South Dakota.

Maher uses a computer to help customers develop the images and information to be engraved on the gravestones and monuments that will be installed in area cemeteries.

He said most of the actual work on these eternal memorials for the deceased is done in Blue Earth.

This firm has both interior and exterior display areas. To the north of the corner building, which was previously used as a dental office, is a park-like gated area with an American flag and several  granite and marble memorial monuments. 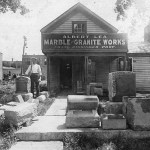 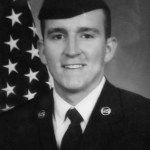 Blane Maher, executive director of Albert Lea Monument, served in the U.S. Air Force from 2008 to 2012. During those years he was stationed in the U.S., plus overseas in Djoubti, Africa; Afghanistan and the Philippines. Provided 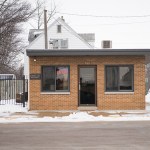 Albert Lea Monument is at the corner of Marshall and Ramsey streets in the city’s north side business district. Colleen Harrison/Albert Lea Tribune 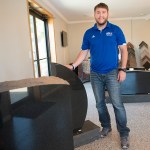 Blane Maher is the executive director of Albert Lea Monument. His parents Mark and Lori Maher own the business. Colleen Harrison/Albert Lea Tribune