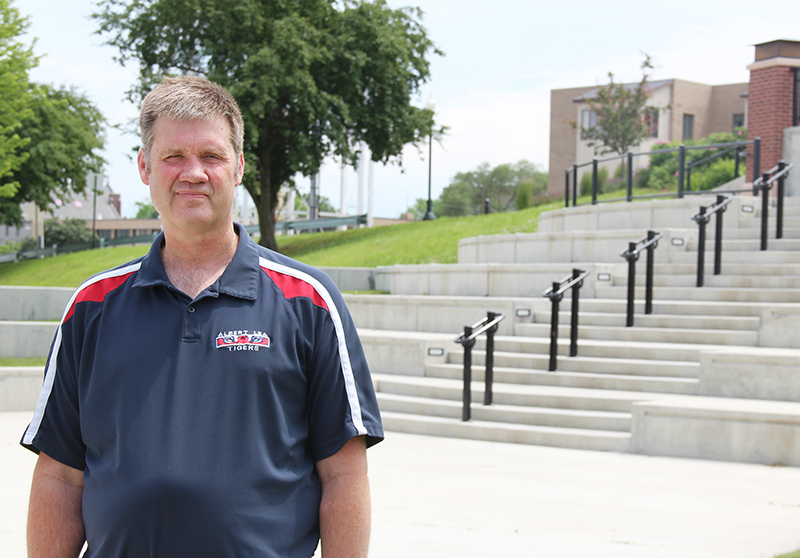 Bob Furland is the interim recreation director for the city of Albert Lea. He has worked for the city for 18 years. - Sarah Stultz/Albert Lea Tribune

A longtime Albert Lea city employee is adjusting to his new role as the interim recreation director.

Bob Furland was appointed to the position in March after former city Parks and Recreation Department Director Jay Hutchison retired.

Furland, who has worked for the city for 18 years, said he grew up in Albert Lea and graduated from Albert Lea High School in 1981. He recalled first working for the city as a high school student.

He went to school for ice arena management and lived in Wisconsin and Michigan, before finding his way back home to Albert Lea in the late 1990s.

His parents and other family members all live in the area.

Over the years, he has been in charge of the ice arena and has overseen maintenance of some of the city’s other properties: 314 S. Broadway, the Marion Ross Performing Arts Center and the Freeborn National Bank building.

He also oversees scheduling of City Arena, Snyder Field and the play parks.

He works closely with Jenny Davis in the department for planning and other purposes such as leagues.

Instead of having one position over both parks and recreation as in years past, the city presently has two people overseeing the department: Furland oversees recreation, while Joe Grossman oversees the parks. Officials have stated they plan to review long-term options for the positions in the coming months.

Furland said it is his goal to increase use of the city’s parks.

He has also helped resurrect a program in the city called Music in the Park. Almost once a week through July a band will play in Fountain Lake Park for people to enjoy.

Furland said Music in the Park was last held in the city about 10 years ago. He said in the past the event had also been held at Edgewater Park.

“It was really hard at first to schedule people, but now people are calling me to sign up,” he said.

He said he and Davis will continue to look at new possible uses for parks, and he asked people to contact him if they had ideas.

When he’s not at work, Furland can be found coaching. He has coached for 12 years, and is presently the Albert Lea High School boys’ soccer head coach, as well as a coach with his son for the U-15 boys’ team.

He said he coached his son when his son was on the team and now him and that same son are coaching together.